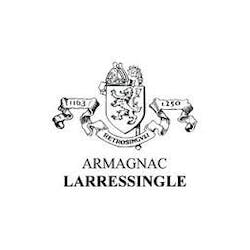 The #1 Armagnac in the United States Blended from spirits originating in Armagnac's two highest-quality growing regions One of the very few firms still owned by the founding familyKobrand's longest-standing representationThrough generations of tradition, consistent respect of the terroir, and the gradual advantages of modern distillation technology, Larressingle Armagnac is second to none as a world-renowned spirit. According to time-honored secrets, the Papelorey family marries only the finest brandies from Bas Armagnac and Ténarèze to achieve the unique and highly regarded Larressingle Armagnac.Chateau_3 Château de Larressingle1837: The Beginning In 1837, Hippolyte Papelorey embarked on a small family venture in the production of Armagnac. He built his own still, began distilling his own wines and those from neighboring vineyards, and sold his spirits in cask to the French market. For nearly six decades, he managed the firm until his son, Gabriel, succeeded him in 1895.

"In Larressingle, two centuries of tradition yield the single best-selling Armagnac in the United States. Larressingle VSOP Armagnac is produced from a cross-vintage blend of

"This complex, virile and long-lived Armagnac is elegant and refined on the palate, with a subtle, smoky bouquet hinting of prunes and hazelnuts and a