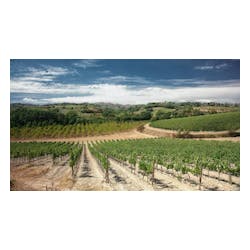 The Dei family produced their first wines from their estate in the heart of the historic appellation of Vino Nobile di Montepulciano in 1985. Now run by Caterina Dei, the estate has become one of the leaders in the region, producing lush, perfumed, fruit-driven wines that are exquisite expressions of the local Prugnolo clone of Sangiovese, blended with small amounts of Canaiolo, Mammolo, and Merlot. The vineyards, on the slopes below the picturesque town of Montepulciano, extend over 52 hectares and are divided mainly between the crus of Martiena and Bossona. The Vino Nobile Riserva Bossona, which comes entirely from the best positions in that Cru, is considered one of the best expressions of the Montepulciano terroir. All it takes is a taste of these wines to know that they are the epitome of quality for the region. Farming Practice:Practicing Organic

James Suckling 94 Top Value Wines 2020 # 94 "Lots of orange peel to the ripe and beautiful cherries. Its full-bodied with chewy tannins and a

Wine Spectator 95 "This red is broad, yet vivid and focused, featuring violet, black currant, blueberry, iron and tobacco aromas and flavors. A swath of dense

Wine Spectator 93 "This is all about complex, ripe plum and blackberry flavors, woodsy funk and supple tannins, with flashes of leather, mineral and camphor. More

Wine Advocate 90 "The 2014 Vino Nobile di Montepulciano is bright and tonic with a zesty fruit profile. This wine shows a higher degree of inner

James Suckling 92 "A delicious and velvety-textured red with chili, spice, dried fruit and cedar aromas and flavors. Full body. Flavorful finish. Balanced. One of my

Vinous Media 92 "The 2011 Vino Nobile di Montepulciano is a drop-dead gorgeous beauty. Dark, sensual and totally inviting, the 2011 is laced with dark red

Wine Enthusiast 94 WE TOP 100 2013 Cellar Selections Rank 38 "This savory wine has earthy and fruity fragrances of underbrush, spice and plum. The palate delivers

Robert Parker 91 "The 2008 Vino Nobile di Montepulciano opens with a blast of sweet, perfumed fruit. It reveals gorgeous vibrancy in its dark berries in