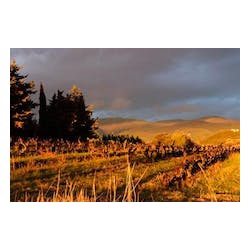 The seemingly reserved façade of Michèle Aubèry-Laurent melts away quickly when she speaks about her wines. As a former nurse (who often favored natural remedies), she has come to treat her vines with the same care, conviction, and passion as she had for her former patients. She and her husband, Philippe, bottled their first vintage of Domaine Gramenon in 1990, in the far northern-eastern stretches of the southern Rhône, in the town of Montbrison-sur-Lez. Philippe was a talented vigneron--both creative and edgy--and he loved to push the envelope of the regulations imposed by the I.N.A.O. In 1999, in an unexpected twist of fate, he was killed in a tragic accident. Michèle was suddenly left on her own with their three children, vineyards, and a winery to deal with. Crushed but undaunted, Michèle stepped to the forefront, boldly picking up where Philippe left off. Over the years, Michèle has discovered her own creative voice in her new vocation; in so doing she has catapulted Domaine Gramenon into cult wine status. Today, she works twenty-six hectares with her talented son, Maxime François (a rising star in his own right), farming both young and very old vines alike. They employ organic and biodynamic practices in the vineyards, with a strong non-interventionist stance in the cellars. Maxime François has begun flexing his own creative muscle, bottling four cuvées at the domaine under his own name. Domaine Gramenon is the authentic embodiment of the philosophies that the Laurents espouse. They do not merely champion organic farming, but they incorporate the concept of sustainability into their daily lives by growing their own food and raising their own animals. The domaine bottles an AOC Vinsobres and a myriad of parcels of Côtes-du-Rhône located around the domaine. Though Michèle and Maxime continue to test the confines of the appellation, the cellars are unsurprisingly old-fashioned. The Laurents use gravity-fed tanks and age their wines in oak demi-muids and foudres. That they take such gutsy risks as bottling old-vine fruit with so little sulfur, without fining or filtration, only demonstrates the lengths they will go to in order to highlight the freshness, purity, and intoxicating aromas of their small, rare production.

Decanter 92 "Inky-dark 100% Syrah from this renowned low-intervention producer in the Drme. With a lovely airy purity and fresh, herby nose, it is

A young-vine Grenache produced naturally and released early, this atypical Côtes-du-Rhône is designed specifically to quench thirst while showcasing the scrumptious flavor of fermented biodynamic

Certified Biodynamic. Made from 20-40 year old vines, 100% Syrah, at 400 metres, clay and limestone soils. Grapes are partially de-stemmed and ferment with wild

James Suckling 94-95 "A blend of three parcels of grenache of varying ages. This ranges through strawberry, raspberry and plum fruits with a smooth, creamy and

This varietal Grenache is made from Gramenons younger vines (approx. 70 years old) in the Cotes du Rhone. Spicy, raw, and dark-fruited, this aint your

Decanter 91 "Grenache grown at 350m in the far north of the southern Rhône. Grapes are partially destemmed, fermented with natural yeasts and macerated for 15

A young-vine Grenache produced naturally and released early, this atypical Cotes-du-Rhone is designed specifically to quench thirst while showcasing the scrumptious flavor of fermented biodynamic

James Suckling 94-95 "A blend of three parcels of grenache of varying ages. This ranges through strawberry, raspberry and plum fruits with a smooth, creamy

Although everyone’s experience is different, I’d be willing to wager that for most Syrah lovers, the seminal Syrah experience was with a bottle from the

" 100% Syrah. With its wealth of dark, lifted black currant fruit and lip smacking acidity, its a pretty enjoyable quaff. This estate has garnered

"100% Syrah. With its wealth of dark, lifted black currant fruit and lip smacking acidity, its a pretty enjoyable quaff. This estate has garnered enormous