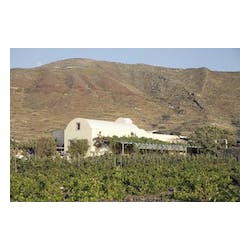 "Sigalas is one of Greece's finest white wine producers – in fact, a short list candidate for the best. I would like to take credit for that conclusion, but there is not much dissent here. This producer is universally acclaimed for his skill with Assyrtiko of all types – dry, barrel fermented and sweet – and I can only climb on the bandwagon. Sigalas is simply a master with this grape."-The Wine Advocate Domaine Sigalas was founded in 1991 by Paris Sigalas, Christos Markozane and Yiannis Toundas. Initially, Sigalas made his wine at the converted Sigalas family home. In 1998 a new vinification, bottling and aging unit was built in a privately owned area of Oia, on the northern part of Santorini. Sigalas has been a pioneer in the organic viticulture and has participated in a government organic farming methods program since 1994.Paris Sigalas remains committed to the founding principles of Domaine Sigalas – a creative relationship with the tradition, the Santorini Vineyards as well as the use of the best in winemaking technology and experience. Sigalas concentrates on native grape varieties works most closely with Assyrtiko, but also has plantings of Athiri, Aedani, Mandilaria and Mavrotragano. The winery owns 14 hectares of organically grown Assyrtiko and includes permanent cooperation with local grape producers. Recently under cultivation are another 4 hectares of Aedani and Mavrotragano, 2.5 hectares of Assyrtiko and in the near future plans to add another 15 hectares of Assyrtiko. The porous volcanic soil of Santorini allows the earth to retain water, giving the vineyards the ability to stay nourished during the high summer temperatures. During the hot Greek summer, rains are extremely rare and the only source of water for the vineyards is the nocturnal fogs.After the evening sun sets the island becomes enveloped in a fog that comes in from the sea. The vines are able to retain the water they need from this evening fog and use it during the warm daylight hours when it is needed most. Santorini was also one of the rare wine-making areas in the world not attacked by phylloxera, because of the high content of sand found in volcanic soil. Because of their resistance to phylloxera the vines retain their original root stocks.The winds saturate the island throughout the year. The only way for the grapes to survive from the direct exposure of sun and strong winds is to be protected inside low-basket-shaped vines, the "ampelies", as they are called locally forming a unique pruning system. The refreshing northerly winds that blow from July to September, known as the "meltemia", also help keep the vines from developing the numerous fungi that can result from the combination of summer heat and humidity. Farming Practice:Practicing Organic

Tasting Notes "This is not the zestiest Assyrtiko, but it sure is ripe and rich. It sits in the mouth, coating the palate and seeming very

Wine Advocate 93 "The 2018 Santorini Assyrtiko, the flagship 100% Assyrtiko is unoaked and comes in at 14% alcohol. This is textured and elegant, while still

Wine & Spirits 95 "This assyrtiko may not be as powerful as Sigalas’ single-vineyard bottlings, but the 2017 excels in the simple joy and purity it

Wine Advocate 89 "The 2017 Aa is the typical Sigalas 75/25 blend of Assyrtiko and Athiri, unoaked and coming in at 14% alcohol. This has plenty

Wine Advocate 95 "The 2016 Assyrtiko is unoaked and comes in at 14% alcohol. One of the island's benchmarks, this is always in fine form these

Wine Advocate 92 "The 2015 Aa is Sigalas' typical blend, 75/25 Assyrtiko and Athiri. An under-the-radar buy, this is very fine again this year, chock full

Wine Advocate 94 "The 2015 Assyrtiko, Sigalas' monovarietal Santorini, comes in at 14% alcohol. If this isn't the unoaked wine of the vintage so far, it

Wine Advocate 94 "The 2014 Assyrtiko Barrel Fermented is Sigalas' oaked version of the Santorini reviewed this issue, aged for six months in French oak (10%

Wine Advocate 92 "The 2013 Santorini is Assyrtiko, listed at 13.7% alcohol this year. Fresh and refreshing in this vintage, stylistically this seems to be a

Wine Advocate 91 "The 2012 Aa is new branding for Sigalas’ familiar, fine value blend—the former “Asyrtiko-Athiri” (75%-25%). Apart from the new label and the new

Robert Parker 90 "The 2011 Asirtiko / Athiri, is 75% Assyrtiko (notwithstanding the inconsistent spelling on Sigalas' label), with 25% Athiri. It is fragrant and lovely

Robert Parker 93 "The 2011 Santorini is an exceptional Assyrtiko from Sigalas, another great moment for this estate. On opening, I was actually surprised at how

Wine Spectator 91 WS TOP 100 2011 Rank 83 "Juicy and rich, with concentrated pear, apple and white fruit flavors that are backed up by plenty of