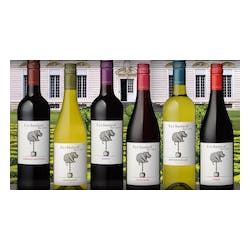 Good friends Tierry (renowned French winemaker) and Guy (British wine industry rebel) created FAT bastard almost by accident. It started out as an experiment Thierry had going in the back of his cellar, leaving a barrel "on the lees" (yeast cells). He didn't know what to expect, but when he and Guy tried the wine, Thierry exclaimed, with a strong French accent, "Now zat iz what you call eh Phet bast-ard!" This very British expression perfectly described the wine's wonderful color and round, rich palate, so that's what they named it. In 1991, Véronique Torcolacci obtained her degree in oenology from the University of Toulouse. She joined Gabriel Meffre as oenologist in charge of quality before becoming head winemaker.

"Round in the mouth with white flower aromas and a long, toasty finish. Food Pairings: Perfect match with a variety of cheeses, poultry and cream

To make the Fat bastard Shiraz we sourced wines in the Minervois area near Carcassonne, in the Pezenas sector, and in the north of Nimes.

Juicy and spicy with touches of Transylvanian wolf hair and cucurbits earthiness, this ripe blood-red nectar stays long and rich in the mouth, much appreciated

Vinification: To make the Fat bastard Shiraz we source wines in the Minervois area near Carcassonne, in the Pezenas sector, and in the north of

Dark ruby in color with vibrant purple reflections. The nose displays a spicy, yet fresh profile containing tinges of olive, clove and sweet blueberry while

" Rich and dense with complex aromas of blackberries, licorice and vanilla. Tannins are ripe and delicate. Food Pairings: A perfect match with red meat,

"Tasting notes: Rich and dense with complex aromas of blackberries, licorice and vanilla. Tannins are ripe and delicate. Food Pairings: A perfect match with red