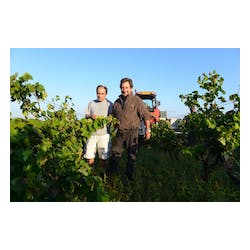 Over the last quarter century, Domaine de la Janasse has become one of the most highly-regarded estates in Châteauneuf-du-Pape. Led by siblings Christophe and Isabelle Sabon, the estate combines the best of both traditional and modern techniques to craft a collection of truly riveting wines from "simple" value-priced VDP's to their benchmark Châteauneufs. The estate was founded in 1976 by Aimé Sabon, the father of Christophe and Isabelle, who still oversees the vineyards. The property consists of 40 hectares, spread over as many as 70 different parcels throughout the appellation. The terroirs range from sand, as can be found in their well-known plots in the North of the appellation – Chapouin and La Janasse– to lightly-colored clay limestone soils to gravel red clays and galets, most notable in their plots in Le Crau in the South. While Aimé works in the vineyards organically, his children, Christophe and Isabelle, are in charge of wine production. Christophe is a self-proclaimed "great defender of Grenache," which still represents 75% of their vines. With assistance from Aimé and Isabelle, he manages the common rusticity of Grenache-based wines through meticulous work in the vineyards and cellar. The result is a wide range of rich and flavorful Châteauneuf-du-Papes ,Cotes-du-Rhônes and Vins de Pays that are complex and balanced – often in contradiction to an region better known for sheer exuberance and power. In attempting to describe the style of the wines at Janasse one is confronted with the inadequacies of using "style" to express the qualities of the wines here. While there is a modern quality to the richness of the fruit it is beautifully paired with a pronounced sense of place and complexity. The reds are not entirely destemmed and see long and gentle macerations lasting up to a month, which may account for some of the earthiness and finesse in the wines. Aging takes place in various vessels from large concrete tanks to foudres, and demi-muids. The barrels are mostly neutral and darkened with age and repeated use. The Châteauneuf-du-Pape Blanc here are frequently overlooked and are some of the best examples in the appellation. Coming mainly from sandier soils only the Roussanne sees time in barrel while the Grenache and Clairette are age entirely in tank. Minuscule quantities of a reserve Blanc, the Prestige, is aged entirely in demi-muid from 1-3 years old. The reds from Janasse are frequently considered to be among the best in the region whether it is their pleasingly complex Côtes-du-Rhone and Côtes-du-Rhône Villages or their three bottlings of Châteauneuf-du-Pape. Not surprisingly the aptly named Tradition is the most reserved of their Châteauneufs while Chaupin and Vieilles Vignes are studies in contrast, between the purity of Grenache from sandy soil clearly evident in the former while the energy, to intensity and power of the later – an indication of the age of the vines, the range of soils from which it is sourced and the density afforded by the addition of old-vine Syrah and Mourvedre to their centenary Grenache.

Wine Advocate 95 "Coming from a cooler, sandy terroir in the northeastern part of the appellation, the 2011 Chateauneuf du Pape Cuvee Chaupin (which comes 80%

Wine Advocate 96 "And a candidate for the wine of the vintage, the 2011 Chateauneuf du Pape Vieilles Vignes is always a rough blend of 85%

Robert Parker 90 "An amazing offering, the 2011 Vin de Pays Orange Viognier comes from a selection of grapes Sabon made from cuttings in the finest

Rhone Report 91 "A custom cuvee for Import Eric Solomon, made by Christophe Sabon, that’s available only in the US market, the 2011 Domaine de la

Robert Parker 92-94 "The amazing 2010 Cotes du Rhone-Villages Terre d'Argile may be just as good as the 2007. A black/ruby color is followed by abundant

Robert Parker 98-100 "A potential candidate for perfection is the 2010 Chateauneuf du Pape Chaupin, which may turn out to eclipse my favorite Chaupin to date,

Robert Parker 92 "This is a custom cuvee made for the U.S. market by Eric Solomon from the dynamic, conscientious, remarkably consistent producer of Chateauneuf du

Rhone Report 95 "Showing brilliantly from tank last year, and not disappointing from bottle this year, the 2010 Domaine de la Janasse Châteauneuf-du-Pape is a stunning