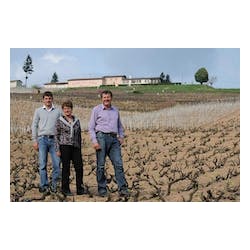 ORGANIC FARMINGSTEEP AND HIGH ALTITUDE VINES,1500+ feet above sea levelVERY OLD VINES – 50 years old, MANY 75-100 years old !DECOMPOSED, ROSE COLORED GRANITE TERROIRAROMATIC AND ELEGANT GAMAY AGED IN TANKLE PERREON SHOULD BE A CRU VILLAGE!NEW YORK'S NUMBER ONE BEAUJOLAIS YEAR AFTER YEAR ! "While most of the best Beaujolais come from the crus, it is not a hard rule. [The] Beaujolais-Villages from Domaine de la Madone...illustrates what dedicated producers can accomplish when they don't cut corners." – Eric Asimov, The New York Times Domaine de la Madone is one of our favorites--few estates craft such character-rich, expressive Gamay outside of Beaujolais' band of "cru" villages. But that's Madone's secret--their vineyards should be rated Beaujolais cru (or grand cru, if we had any say in it). This is certainly one of the finest values for the quality anywhere in the world. There are many terroir parallels between the village of Le Perréon and cru Fleurie, a village known for its aromatic and wonderfully elegant Gamay. Brothers Olivier and Bruno Bererd tend almost exclusively older vines, many which are more than 100 years old. The family's steep hillside vineyards are a challenge to harvest (at an angle of 30 to 40 degrees!); the brothers can't drive a tractor through their fields, as it's too dangerous--pickers have to scoot along at severe angles and struggle with a wheelbarrow as grapes are painstakingly collected at harvest. Our selection of Beaujolais Le Perreon from is vinified gently in tank, to preserve every bit of fresh, aromatic and juicy fruit.

Wine Spectator "Creamy black cherry and blackberry notes show hints of mocha, licorice and herb in this supple, light-bodied red, with the light tannins giving a

The Estate Domaine de la Madone is one of our favoritesfew estates craft such character-rich, expressive Gamay outside of Beaujolais band of cru villages.

Wine Spectator 87 "Open-knit and packed with ripe flavors of cherry and raspberry that are infused with licorice, violet and spice notes, all bound together by

Wine Advocate 92 "The 2017 Beaujolais-Villages Le Perreon is superb, wafting from the glass with aromas of crushed blackberries, mulberry and licorice. On the palate, it’s

" From low-yielding Gamay clones, the wine is mostly destemmed (90%-100%), goes through an 8-10 day maceration (for softer tannins & spice) and then traditional

Wine Spectator 87 "Well-balanced, this is creamy on the palate and lightly juicy throughout, with flavors of pureed black raspberry, star anise and fresh, loamy earth.

Wine Advocate 90 "The 2013 Beaujolais “Tradition” has an attractive nose of raspberry leaf and mulberry fruit that is well-defined and feels very natural. The palate

"2013 is the vintage of the sun : our wines are very rich. Beautiful ruby dark color. A lot of fruits and spices aromas,