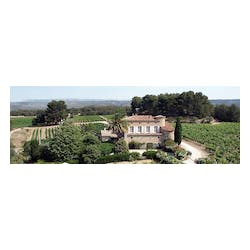 Bandol borders the Mediterranean Sea and Tour du Bon is tucked a half a mile away on a hillside near a tiny village called Le Castellet. The terroir here is a clay-limestone mix with a red subsoil. The 12 hectare of vines form a natural amphitheatre overlooking the sea, and with the abundant Provencal sunshine and very little rain, it's the hottest area in the appellation. Agnès Henry is the current winemaker and owner of Domaine de la Tour du Bon. Her parents bought the estate in 1968 and it took them two years to dig into the rocky earth and get vines planted. Agnès has been making the wines full time for the last 25 years. She is one of the original winemakers in the "natural" movement, although, she does not advertise this info at all. When asked about it she says that she isn't interested in being a missionary or spokesperson for the natural movement. She practices organic agriculture and is hands off on the cellar because it makes the best wines (period). She's not certified because it's too much paperwork. Agnes now has a dyanmizer for preparing biodynamic treatments, but hesitates to call herself biodynamic. Fermentations take place in open top cement vats and normally last about three weeks. She pumps over occasionally to get oxygen to the yeasts. The final expression is traditional and unmanipulated wines that truly express Bandol's unique terroir.

36% Mourvèdre 32% Cinsault 25% Grenache 7% Clairette. The soft, ochre-tinged color is highly evocative of the sun-soaked Provençal countryside. Full of fruit with a

36% Mourvèdre 32% Cinsault 25% Grenache 7% Clairette. The soft, ochre-tinged color is highly evocative of the sun-soaked Provençal countryside. Full of fruit with a

"The rosé's soft, ochre-tinged robe is highly evocative of the reassuring heat of the Provençal countryside. This very subtle wine exudes perfumes that are at

In 2012, Agnès met Elisabetta Foradori, who makes wine from the local Teroldego in the Italian Dolomites, notably in amphora. Agnès said that the

Wine Advocate 91 "A rocking rosé, the 2014 Bandol Rose from Domaine Tour du Bon knocks it out of the park with its orange blossom, citrus,

Agnès Henry is the current winemaker and owner of Domaine de la Tour du Bon. Her parents bought the estate in 1968 and spent the

Wine Spectator 92 "Exhibits powerful, meaty aromas, with flavors to match, as well as notes of dried cherry, smoke and spice, edged by hints of sage.