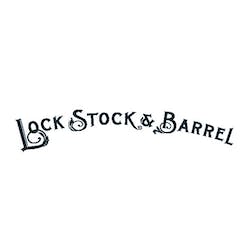 The origins of rye whiskey in the United States date back to colonial America, when early European settlers brought with them the tradition of distilling excess grains from their farms into whiskey. For over a century, the production of rye whiskey centered around Pennsylvania and Maryland, where large numbers of Scottish and Irish immigrants had settled. The popularity of rye whiskey grew steadily among the colonists, and when the British blockade of American ports during the American Revolutionary War prevented the importation of rum, rye whiskey became America's drink of choice. Inspired by America's rich rye heritage, Robert Cooper crafted Lock Stock & Barrel Limited Release 13 Year Old Straight Rye Whiskey. Cooper is a third-generation distiller -- his grandfather, Maurice, founded Cooper Brewery in the early 20th century and his father, Sky, worked at a distillery known as Charles Jacquin et Cie