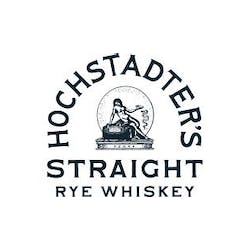 It comes as a surprise to us that any prepackaged cocktail could strike the authenticity of its namesake. But Hochstadter's Slow & Low--a ready-made rye Old Fashioned--does just that. While not the best Old Fashioned we've ever tasted, Hochstadter's is pleasantly full-flavored and more than palatable. Slow & Low sets out to be a cocktail for whiskey drinkers, which explains the 84 proof, extra dry content and the dominant rye warmth. But the brand also carries a historic past. Slow & Low is inspired by their own take on the Rock and Rye, a 19th century bar staple where tenders would pair rock candy with rougher whiskey to take the edge off. Hochstadter's perfected a pre-made version and began distributing bottles of it in 1884. Now, with Slow & Low, aged rye whiskies are blended with air-dried naval orange peel, raw honey and the horehound herb. All are stirred slowly over a low-burning fire, allowing the ingredients to integrate. The quality of the components contributes to the overall success of the concoction.The most important element, however, is Slow & Low's twofold ease. First, you can drink it neat or over ice. Simply pour and enjoy. Second is the cocktail's smoothness, which allows for widespread drinkability; people afraid of whiskey need not fear the Slow & Low. This Cooper Spirits launch brings a classic cocktail to your liquor cabinet without any fuss. A direct and effortless take on a complex mixed spirit, Slow & Low is ready as soon as it's uncapped.

"Slow and Low was inspired by the original Hochstadter’s Rock and Rye recipe and a few other 19th century recipes we happened to unearth. It’s

The Cooper Spirits Company has announced the release of its third bottling of Hochstadter’s Vatted Straight Rye Whiskey. Taken from the historic Scottish term for the

Slow and Low was inspired by the original Hochstadter's Rock and Rye recipe and a few other 19th century recipes we happened to unearth. It's