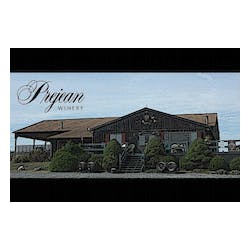 As often happens with a winery, someone starts with a dream, and for James and Elizabeth Prejean that dream began in California. Jim was born in Carencro, LA and ended up in California the hard way, wounded in a hospital. The USS Cushing, his previous home, was sunk in WWII in the Battle of Guadalcanal and he was severely wounded. After college, he began his career in labor relations. Jim and Elizabeth met on an airplane where Elizabeth worked as a flight attendant and Jim was traveling on business. They married not long after and lived in San Francisco. The short ride from San Francisco to wine country kindled the dream. Jim's career with American Can took them far away from wine country and brought them eventually to Connecticut in 1974. Jim discovered the Finger Lakes wine industry during business trips to the Finger Lakes and the dream was rekindled. Jim and Elizabeth decided to "retire" to a winery. In 1978, they purchased 53 acres and planted the first 13 in 1979. Traveling from Connecticut on the weekends, they worked the farm for 6 years until, in 1985 they took up permanent residence and built the winery. Prejean winery opened officially in 1986. Sadly, Jim died suddenly in 1989, but he was fortunate enough to see his dream realized. He was quite proud of their accomplishments, and even though he only lived for three years after the winery's opening, he touched many people. Tom, his wife Amy and Elizabeth, along with Winemaker Jim Zimar, and our friendly, knowledgeable tasting room staff are running the winery now and, hopefully, maintaining Jim Prejean's passion.

"Our Tiger Lily blush is one our most popular wines and fine example of grape?s ability for mimicry. A sip of Tiger Lily is like