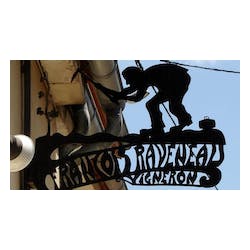 The domaine was created in 1948, when François Raveneau consolidated his holdings with his wife's family's vineyard parcels. Though his father had spent years selling off prime parcels, François was doing his best to bring new ones back into the hands of the domaine. The reputation of this elusive and somewhat stoic vigneron spread quickly, as his style was easily recognizable as far superior to the growing trend of innocuous, somewhat uniform Chardonnay. The domaine's production has always been miniscule, and Kermit fought in vain throughout the seventies to add these wines to his portfolio. As an ardent practitioner of natural wines, François was extremely skeptical about shipping overseas, fearing that the wines might suffer during the ocean voyage. Assured by friends that Kermit was very familiar with natural wines and only shipped in refrigerated containers, François finally agreed (see Adventures on the Wine Route). The relationship started with the 1979 vintage and has continued solidly ever since. Today, François' sons, Bernard and Jean-Marie, direct the domaine, yet stay true to their father's philosophy in both the vineyards and the cellar.

The most sublime and the most celebrated estate of Chablis, the wines of Domaine Raveneau are a rare findexceptional because the vineyard holdings are almost

The most sublime and the most celebrated estate of Chablis, the wines of Domaine Raveneau are a rare findexceptional because the vineyard holdings are almost

Domaine Franois Raveneau is a noted producer based in the Burgundy subregion of Chablis, where the small plots of Chardonnay produce some of the appellation's

Wine Advocate 92-94 "The 2018 Chablis 1er Cru Butteaux is another of the highlights chez Raveneau this year, wafting from the glass with a bouquet of

Wine Advocate 94+ "A brilliant wine that numbers among the finest recent renditions of this cuve, Raveneau's 2017 Chablis 1er Cru Butteaux wafts from the glass

Wine Advocate 93 The 2017 Chablis 1er Cru Monte de Tonnerre is also performing well, despite what was a challenging vintage for the Raveneau family's holdings

(from 1.49 holding of 40+ year old vines). Reduction. As is usually the case, the broadshouldered and powerful flavors possess plenty of size, weight and

Wine Advocate 90 "The 2016 Chablis wasn't too heavily impacted by the year's frosts, and it's quite classic in profile, offering up aromas of lemon oil,

Wine Advocate 92 The 2015 Chablis 1er Cru Forets has a tightly wound bouquet, perhaps a little resinous compared to other premier crus, with a touch

Wine Advocate 92 The 2013 Chablis 1er Cru Vaillons does not quite deliver the same intensity as the Montmains at the moment, although it is still

Wine Advocate 89 The 2013 Chablis Villages has commendable precision on the nose, almost Puligny-like in style. The palate is clean and fresh with light acidity,

" Domaine Ravenau is arguably one of the top two estates in Chablis, consistently producing wines that show great purity of fruit, grip, and delineation.

" Domaine Ravenau is arguably one of the top two estates in Chablis, consistently producing wines that show great purity of fruit, grip, and delineation.

"The most sublime and the most celebrated estate of Chablis, the wines of Domaine Raveneau are a rare find—exceptional because the vineyard holdings are almost

Wine Advocate 94 "The 2009 Chablis Vaillons is all about delineation, focus and transparency. It is a compelling, marvelously subtle wine in every way. In particular,

International Wine Cellar 87-89 "Stone fruits and minerals on the nose. Juicy and firm-edged, with mineral and menthol flavors joined by a more exotic whiff of