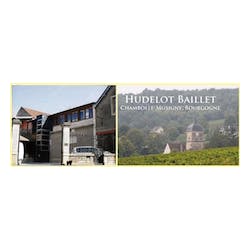 Hudelot-Baillet is a 21-acre domaine in the Chambolle-Musigny region. It was founded in 1981 when Joel Hudelot inherited land from his father, Paul Hudelot, a much admired winemaker. The Hudelots have been making wine in Côte des Nuits for four generations, and today Hudelot-Baillet is run by Dominique Leguen, Joel's son-in-law. Leguen is also vineyard manager for Frederic Mugnier. The estate has a grand cru parcel in Bonnes-Mares, and premier crus in Chambolle-Musigny, as well as village wines. Côte de Nuits is the northern part of the Côte d'Or and it includes the most famous vineyards and wine communes in the world. There are more Grand Cru appellations in the Côte de Nuits than anywhere else in Burgundy. Of the fourteen communes, or villages in the Côte de Nuits, six produce Grand Cru wines. They are Gevrey-Chambertin, Morey-St.-Denis, Chambolle-Musigny, Vougeot, Flagey-Échezeaux and Vosne-Romanee. Some of the vineyards within the Côte de Nuits are tiny, which adds to their prestige. The fabled Grand Cru vineyard La Romanee is barely two square acres. Altogether there are twenty-four Grand Cru vineyards. The region takes its name from the village of Nuits-Saint-Georges. Côtes de Nuits produces mostly reds from Pinot Noir, and the wines have been in demand for centuries. During the 18th century King Louis XIV's physician recommended that for his health the king only drink wines from Nuits-Saint-Georges. Like most of Burgundy, the soils of the Côte de Nuit can vary greatly from one vineyard to another, though most are a base soil of limestone mixed with clay, gravel and sand.

Wine Advocate 90-92 "The 2013 Chambolle Musigny Vieilles Vignes has a much more backward, introspective bouquet compared to the Village Cru at the moment, but there

" Domaine Hudelot-Baillet is a true Chambolle-Musigny producer with cellars in the town as well as holdings entirely within the appellation. The domaine was

" Domaine Hudelot-Baillet is a true Chambolle-Musigny producer with cellars in the town as well as holdings entirely within the appellation. The domaine was

Allen Meadows Burghound 89 "An attractively fresh nose is comprised of red and black pinot fruit, plum and wet stone hints. The round and naturally sweet

Wine Advocate 88-90 "The 2013 Borgogne Haute Côtes de Nuits Blanc, which was harvested later in the week of harvest around October 11 and cropped at