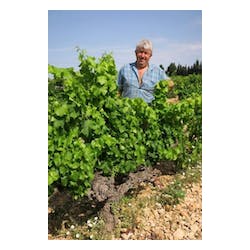 Located in between Gigondas and Chateauneuf du Pape, the village of Vacqueyras received Appellation Controllee status in 1990. Domaine le Couroulu, founded in 1928 and still owned by the Ricard family, is known for producing some of the most full-bodied Vacqueyras and other wines from their 20 hectares of old Grenache and Syrah vines. The estate is named for the Curlew bird, which is known in Provencal dialect as Couroulu, and is the signature emblem on the domaine's labels. Robert Parker rated the estate as an excellent producer in his book, Wines of the Rhone Valley, and cited it among his "Best European Wine Values." Most recently, he bestowed even more praise, asserting that "this is a sensational estate... whose wines have given [him] enormous pleasure for nearly two decades" (Wine Advocate #185, Oct. 2009). Winemaker Guy Ricard, who represents the estate's third generation of winemakers, is one of Rhone's most passionate and agreeable personalities – qualities that are reflected in his full-throttle, generous and engaging wines.

International Wine Cellar 90 Wine Spectator 90 Wine Advocate 90 "This impressively run, 40-acre estate has consistently made top-notch wines for many years. The most forward and