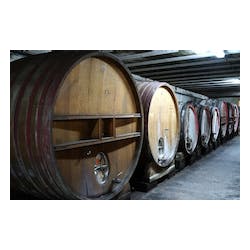 Domaine du Pegau is an estate producer of Châteauneuf-du-Pape, owned by father daughter team Paul and Laurence Féraud. Laurence currently manages the estate and makes the wines. Since the 17th Century Pegau is recognized as one of the top estates in Châteauneuf, its wines are considered among the world's greatest. Unfortunately supply is far outweighed by demand. Pegau's vineyards consist of 11 parcels totaling 19 hectares among Châteauneuf's best 'terroirs' including 'La Crau'. Pegau is well-known as one of the reference points for traditionally styled wines. One only has to spend a half hour or so talking with Paul Feraud, or his ambitious and brilliant daughter, Laurence, to understand that they will not make any compromises, nor change their winemaking or upbringing styles to suit the whims of the fickle consumer. This is an estate where the bottled wines often taste significantly better than they do from barrel. Fermentations are in cement vats with wild yeast. Most of the wines are aged in foudre, and bottled unfined and without filtration.

Wine Advocate 94 "One of my favorite wines, the 2012 Châteauneuf du Pape Cuvee Réservée is a classic. Beautiful on the nose, with notions of ground

Wine Advocate 93 "The 2011 Chateauneuf du Pape Cuvee Reservee is one of the stars of the vintage. Exhibiting a surprisingly deep purple color, it is

Wine Spectator 97 WS TOP 100 2013 Rank 7 "Intense, with the tarry, bittersweet cocoa–fueled grip of the vintage running through a well-endowed core of crushed plum,