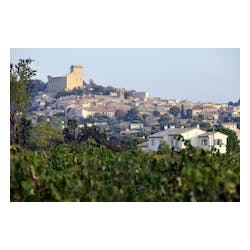 Isabel Ferrando's reputation for outstanding wines has grown every vintage since her first release in 2003. She purchased Domaine Saint-Préfert from the Serre family, who was one of the first to estate-bottle in the appellation in the 1930's; at that point, the domaine was 13.2 hectares, all in the Les Serres lieux-dit, south of the village of Châteauneuf. In 2004, she purchased more land and started making the 100% Grenache cuvée Colombis, primarily from the lieux-dit of Colombis, with sandy soil; she bottles this wine as Domaine Isabel Ferrando. Ferrando has always farmed organically. She has very old vines in her holdings: the Grenache vines average more than 70 years old, and she still has some of the original Mourvèdre that was planted in the 1920's. Throughout each parcel, all thirteen varieties are co-planted, something that Henri Bonneau told her is, "the beginning of the complexity [of her wines.]" There is not a secret formula here to making great wines. Ferrando has a young team and she is open to new ideas; she relies on tradition without being trapped by it. Starting in the 2009 vintage, Isabel started working with whole-cluster fermentations (without added yeasts,) finding that it increased freshness in the wines and lowered alcohol, giving the wines vibrance. Aging happens in a mix of concrete and 600L used barrels for up to 18 months.

Jeb Dunnuck 93 "The 2018 Châteauneuf du Pape reveals a ruby/purple hue and is slightly opaque. Based on 85% Grenache and 5% each of Syrah, Mourvèdre,

Wine Spectator 97 (#44 Wine Spectator Top 100 of 2017) "Vibrant and captivating, with exuberant fruitcake, cinnamon and black tea aromas leading the way for a

The 2015 Clos Beatus Ille Cotes du Rhone is 85% Grenache and 15% Cinsault fermented and aged entirely in concrete. "Medium to full with layers

Wine Advocate 91 "There are two Châteauneufs made in 2012, the classique and the Auguste Favier, with no Collection Charles Giraud. The 2012 Châteauneuf du Pape

Wine Advocate 96 "Even better, and one of the top whites coming out of the Rhone valley, the 2012 Chateauneuf du Pape Vieilles Clairettes is an

Wine Spectator 95 "A range of dried mango, papaya and quince flavors are melded together, backed by additional notes of peach and persimmon. The long finish

Wine Advocate 93 "The 2011 Chateauneuf du Pape Reserve Auguste Favier (85% Grenache and 15% Cinsault) is deeper and richer on the palate than I remember.

Robert Parker 90-92 "The 2010 Chateauneuf du Pape Classique is 85% Grenache and the rest Cinsault and Mourvedre. Eighty percent is aged in tank and the

Wine Spectator 96 "This gushes forth, with loads of plum, blackberry and cassis that saturate the palate, while apple wood, tobacco and perfumy incense keep everything

Wine Spectator 94 "Very rich and caressing, with lovely plum sauce, melted licorice and cassis aromas and flavors all woven together and backed by ample but

Robert Parker 88-90 "No Chateauneuf du Pape Collection Charles Giraud was made in 2008 because of the challenges of the vintage, but a fine 2008 Chateauneuf

Robert Parker 90-92 "The 2008 Chateauneuf du Pape Reserve Auguste Favier is composed of 85% Grenache and 15% Cinsault. Among the deepest, richest, and fullest of

Robert Parker 90-92 "The 2007 Chateauneuf du Pape is a blend of 80% Grenache and the rest equal parts Mourvedre, Syrah, and Cinsault. Half of it

Robert Parker 100 "Absolutely prodigious, and, like the other two 2007s, superior to what I predicted last year, is the utterly perfect 2007 Chateauneuf du Pape