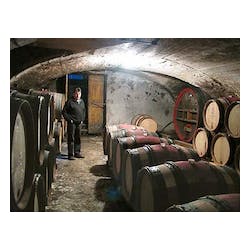 Jean and Agnès Foillard took over his father's domaine in 1980, and soon thereafter began to make Kermit Lynch customers very happy. Most of their vineyards are planted on the Côte du Py, the famed slope outside the town of Villié-Morgon and the pride of Morgon. These granite and schist soils sit on an alluvial fan at the highest point above the town and impart great complexity. However, great real estate is not the only key to Foillard's success. Early on, Jean began to follow the teachings of Jules Chauvet, a traditionalist who defied everything that the more commercial brands were touting in the region. Jean and three other local vignerons, Marcel Lapierre, Jean-Paul Thévenet, and Guy Breton, soon joined in on the movement. This Gang of Four, as Kermit christened them, called for a return to the old practices of viticulture and vinification: starting with old vines, never using synthetic herbicides or pesticides, harvesting late, rigorously sorting to remove all but the healthiest grapes, adding minimal doses of sulfur dioxide or none at all, and refusing both chaptalization and filtration. The end result allows Morgon to express itself naturally, as it should be without the bubblegum and banana aromas of so many other Beaujolais available today. Its rustic structure, spicy notes, and mineral-laden backbone are what real Morgon is all about.

Jean Foillard is a legendary pioneer of the natural wine movement. His family farms fourteen hectares with a non-interventionist mentality in the heart of Morgon,

James Suckling 94 "A generous red with lots of ripe-berry, chocolate, walnut and dry-earth character. Some white truffle, too. Its full-bodied with a round, chewy texture

Natural wine master Jean Foillard's wines are always the very definition of elegance. This bottling is from a parcel of vines on sandstone, so it's

James Suckling 95 "An intensely mineral expression of Beaujolais that makes a good argument for this region, matching the (well known) terroir expression of Burgundy. As

Domaine Jean Foillard is considered to be both mythical & legendary in nature, with a legacy that precedes him. His Morgon Cte du Py is

James Suckling 90 "Alex Foillard’s approach delivers slightly lifted and delicate aromas of strawberries, leading to a palate that has a fresh, crisp and lithe core

James Suckling 92 A red with iodine and berry character and hints of stones. Medium body, bright acidity and a granite undertone. Firm and fine. •

The Morgons of Jean Foillard are among the most sought-after Gamays in our shop—and for good reason. For decades, they have expressed grand cru–like character

This estate comprises nearly fourteen hectares. Foillard’s Morgons are deep, structured, and complex, with a velvety lushness that makes them irresistible when young despite their

Wine Advocate 91-93 The 2016 Morgon Cote du Py is more convincing on the nose than the Morgon Corcelette at the moment, with vivacious dark cherry,

" The Morgon master has struck gold with this Fleurie: blackberries, cassis and herbaceous notes are complimented with racy acidity. Cellar worthy but showing beautifully