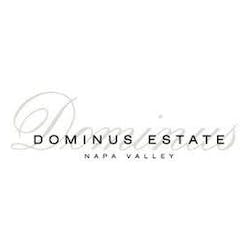 In the late 1960s, while attending the University of California at Davis, Christian Moueix fell in love with the Napa Valley and its wines. son of Jean-Pierre Moueix, the famed wine merchant and producer FROM Libourne, France, Moueix returned home in 1970 to manage the family vineyards, including chateaux Petrus, La Fleur-Petrus, Trotanoy in Pomerol and Magdelaine in Saint Emilion. His love of Napa Valley lingered and, in 1981, he discovered the historic Napanook vineyard, a 124-acre site west of Yountville that had been the source of fruit for some of the finest Napa Valley wines of the 1940s and 1950s. In 1982, Moueix entered into a partnership to develop the vineyard and, in 1995, became its sole owner. He chose the name 'Dominus' or' Lord of the Estate' in Latin to underscore his longstanding commitment to stewardship of the land.

James Suckling 98 "Loads of dark tobacco aromas with blackcurrants and black olives. Boysenberries, too. Full to medium body, ultra-fine tannins and lots of

James Suckling 96 "An open and beautiful wine with green-olive and currant aromas and flavors. Some bark and earth, too, together with mushrooms, herbs, crushed stones

"Its nose of violet is reminiscent of a fine Pomerol. Delivering fresh blue plums and notes of game, the wine is enveloped in refined tannins

James Suckling 96 "This is a flamboyant red that offers hazelnuts, dark berries and a hint of chocolate. Full-bodied with round and soft tannins. So fresh.

James Suckling 96 "This is fantastic on the nose with blackberries and forest flowers. Very aromatic. Full body with soft, well-integrated and medium-grained tannins. Undertones of

The Wine Advocate 100 "The 2013 Dominus is, to my way of thinking, one of the most profound wines Christian Moueix has yet made in

The Wine Advocate 100 "The 2013 Dominus is, to my way of thinking, one of the most profound wines Christian Moueix has yet made in

James Suckling 97 "Fabulous nose of mushrooms, like porcini, with black truffle that turns to citrus fruits such as orange and tangerine. Some vine bark. Full-bodied

Vinous Media 94 "Savory herbs, menthol, smoke and licorice are some of the aromas that open up in the glass in the 2011 Dominus. This is

Robert Parker 99 "Made in a more masculine style, the 2008 Dominus has all of that along with bigger body and more structure, fat, density and

Robert Parker 93 "The 2008 Napanook (84% Cabernet Sauvignon, 13% Cabernet Franc and the rest Petit Verdot) may be one of the greatest Napanooks made. It