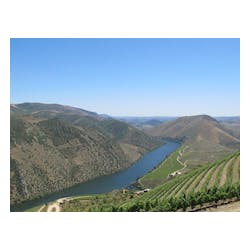 The name Duorum, which is Latin for "from two," captures the spirit of this famed Portuguese winery, which was founded in 2007 by João Portugal Ramos and José Soares Franco, two of Portugal's most renowned oenologists. Ramos, widely considered the "King of the Alentejo," began his career as a groundbreaking wine consultant in the 1980s, and today runs successful projects in the Alentejo, Vinho Verde, Beiras, and Douro. Franco, on the other hand, spent 27 years as wine director for one of Portugal's most renowned wines: the Douro's Barca Velha. Longtime friends and admirers of each other's work, they sought to pool their combined 60 years of winemaking experience and create a wine together. Today, Duorum is widely recognized as a gold standard for Portuguese wines.

This young, bright and fruity wine is packed with blackberry flavors. Tannins and a mineral texture are reminders that this comes from the Douro's schist

A richly aromatic wine of black cherries, tar, mocha, and a hint of violets. On the palate, this wine's rich texture is balanced perfectly against

Wine Enthusiast 90 "This is a ripe, wood-aged wine that also has plenty of fresh black currant fruits. Some firm tannins show that it is still

"This has a delicate core of violet, plum and red berry flavors that are broad yet well-defined. Medium-grained tannins gain power midpalate, with mineral and

Wine Spectator 91 "This has a delicate core of violet, plum and red berry flavors that are broad yet well-defined. Medium-grained tannins gain power midpalate, with

Wine Advocate 92 "The 2008 RESERVA "OLD VINES" is a blend of 70% Touriga Nacional, Touriga Franca, Tinta Roriz and Sousao, the remaining 30% a field