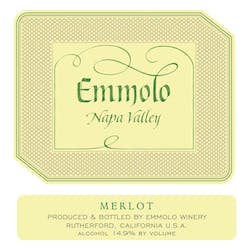 As I take the reins of Emmolo (m – oh – low) Winery from my mother Cheryl Emmolo, I know how lucky I am to be born and raised in the glorious Rutherford district of the Napa Valley.My family has a long-standing history in Napa Valley beginning with my great-grandfather, Italian immigrant, Salvatore Emmolo, who planted grapevines and started a grapevine rootstock nursery in Rutherford in the 1920's. He grew and sold phylloxera resistant vines – the same "resistant" vines that saved the wine industry from the devastating vinifera louse of the late 19th century. His son, and my grandfather, Frank Emmolo, ran Emmolo Nursery and built a strong following amongst Napa Valley grapegrowers - becoming the leading supplier to Napa Valley vintners for five decades.After becoming established grape growers, my ancestors opened up Palermo Winery in 1934, named after the city from which they immigrated. The winery operated for less than a decade, closing due to the public's lack of interest in wine. As things worked out, my family sustained the land over the years and tossed their hat into the ring again, with my mother establishing the building as Emmolo Winery. Today, I'm honored to continue on the family legacy of farming vines and making Emmolo wine here in the original winery my great-grandfather built in 1934.

Wilfred Wong 92 "The 2018 Emmolo Merlot packs plenty of ripe fruit and oomph on the palate. TASTING NOTES: This is a generous and appealing wine.

“A luminous pale gold, this wine opens on the nose with freshness of a first summer rain, layered with scents of white peach and a

“Grapes for this wine were sourced from Napa Valley’s Oak Knoll district, which includes two family vineyards. The area’s cooler weather, along with crop thinning

"An elegant and refined style of Sauvignon Blanc that is subtle and balanced, with minerality and bright natural acidity. On the nose, aromas of citrus,

“Grapes for this wine were sourced from Napa Valley’s Oak Knoll district, which includes two family vineyards. The area's cooler weather, along with crop thinning

"An elegant and refined style of Sauvignon Blanc that is subtle and balanced, with minerality and bright natural acidity. On the nose, aromas of citrus,

"Grapes for this wine were sourced from Napa Valley’s Oak Knoll district, which includes two family vineyards. The area's cooler weather, along with crop thinning

"Grapes for this vintage were sourced from the Emmolo Oak Knoll vineyard located near the city of Napa in a sub-appellation called Oak Knoll. It's

James Suckling 90 "Bright and fruity style of merlot with blueberry and blackberry, light and silky tannins and a bright finish. High-toned but fresh and

"Light and soft-bodied, the 2013 vintage offers a firm acidity balanced with a stark, steely flavor. Aromas are fresh and clean, evoking the scent of

James Suckling 90 "This is tangy and fresh, with sliced-melon and mineral character. Full body with crisp acidity and a bright, clean finish. Like a pretty

Robert Parker 92 "Although this winery has been around since 1944, I am unfamiliar with its wines. Packaged in an interesting bottle with a label sporting

James Suckling 93 "Opulent, juicy red with loads of fruit and spices. If you love full-throttle reds, you'll love this. But it's balanced. Chocolate, walnut, savory.