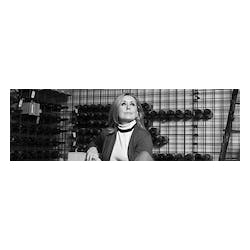 Fattoria Le Pupille, located in the Tuscany region of Italy, is a small estate owned by Elisabetta Geppetti. In the 1990s, Fattoria Le Pupille established a presence in the international wine market. Critics have rewarded its quality and consistency throughout its range of wines. Of particular note has been its Saffredi, which is found on the wine lists of the world's best restaurants. In the 1970s, Fattoria Le Pupille was a farmhouse near Pereta with just five acres of Sangiovese vines. Even on this small tract of land, a good red wine was being produced and bottled, albeit in limited quantities. In 1978, the Morellino di Scansano DOC was created; that same year marked the first harvest of the new DOC wine at Le Pupille. Eventually the space in Pereta became too restrictive and Le Pupille moved to its current headquarters, where the estate now comprises 175 acres.

Wine Advocate 97 ow, there is a very impressive freshness here that defies the heat of this vintage. The 2017 Saffredi does not seem like a

James Suckling 93 "This is the best classic Pupille in years. Aromas of blackberry, chocolate, spice, and black tea. Hints of cream. Full to medium body,

James Suckling 91 "A bright red with dried berry, lemon rind and black cherry. Full body with beautiful fruit and a crisp, gorgeous finish. This is

James Suckling 91 " This is much fruitier than past vintages yet super fresh and clean. It's a wine that you want to drink all yourself.

James Suckling 90 “This is a lively red with dried cherry and lemon skin. Medium body, with fresh acidity and a clean and delicious aftertaste. Opens

Wine Advocate 88 "The 2009 Morellino di Scansano shows off gorgeous mid-palate pliancy and fleshiness in its radiant fruit. A soft yet generous finish makes this

Wine Advocate 96 "Geppetti has produced another gem in her 2006 Saffredi, a French-oak aged blend of Cabernet Sauvignon, Merlot and Alicante. This textured, explosive wine

Wine Advocate 96 "The 2004 Saffredi is utterly captivating. Dried roses cherries, berries and sweet spices emerge from the glass as the wine reveals its gorgeous