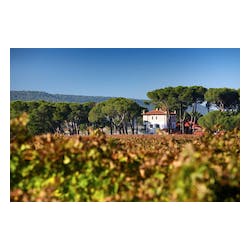 One of the most highly-regarded pieces of land in Ribera del Duero, the estate of Villacreces sits adjacent to Vega Sicilia along the Duero and at the center of the golden mile. There is written evidence that the first vines were planted on this estate in the 13th Century. During the 14th Century, it was run by Saint Pedro de Villacreces and, later on, with its perfect conditions for prayer and retreat, it became a monastery. In the 20th Century, the property belonged to a wealthy aristocratic family from Valladolid, who used to spend their holidays and weekends here. In the early 1970s, 40 hectares of vines were planted, which has now been increased to 60. Including a 200-year-old forest, the estate comprises a total of 115 hectares. In 2003, the Anton family – owners of a Rioja bodega and one of Spain's most famous Michelin starred restaurants in the Basque country – purchased the estate and invested in revitalizing the property. Villacreces is situated at 2,300 feet above sea level on poor soils comprised of lime, gravel, sand and quartz which naturally keep yields low (the estate averages 1.6 tons per acre). The proximity to the Duero river helps protect the vines from and reduce the effects of the frosts that are common in the Ribera del Duero.

Wine Spectator 90 "Plum and boysenberry flavors are ripe and juicy in this plump red. Notes of tar and mineral impart a savory aspect, while firm

THIS ITEM IS BEING PRE-SOLD BY THE CASE! SHOULD ARRIVE BEFORE 12/10 2012 Robert Parker 94 "Wow! From a vineyard adjacent to Spain’s greatest as well as

Wine Advocate 91 "The entry-level 2009 Pruno is predominantly Tempranillo with dollops of Cabernet Sauvignon and Merlot aged for 12 months in seasoned French oak. Opaque