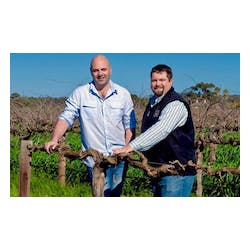 Benjamin Hammerschlag's family arrived in the States from Germany in the late 1800's. His great-great grandfather married a young girl by the name of Flegenheimer and joined her family's business. The Flegenheimers were New York Wine Merchants - in their day a well-known, thriving, pre-Prohibition family enterprise with several locations throughout the greater New York area. From Brooklyn to Yonkers, Hoboken to Newark, Flegenheimer Bros dealt exclusively in quality beverages. The business was established in 1876 and was still flourishing in 1919 when the manufacture, transportation and sale of alcoholic beverages was outlawed in the United States. Three generations later, the youngest Hammerschlag has decided to resurrect this heritage with a reserve red from his high altitude, McLaren Vale property, giving new life to the legacy that began long before he too chose wine as his passion and profession.

" This grenache lends itself to robust cherry flavors with refreshing acidity. Small amounts of Shiraz add blackberry and deep color as well as tannin

Wine Advocate 91 "A blend of 85% Grenache and 15% Shiraz, the medium garnet-purple colored 2014 Flegenheimer Paisant Red is packed with kirsch, raspberry coulis and

Flegenheimer 'Out of The Park' Petit Sirah 2013

Wine Advocate 90 "Deep garnet-purple colored, the 2013 Out of the Park Petite Sirah has an intensely scented nose of baked blackberries, crème de cassis and