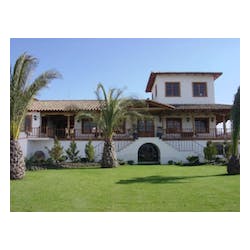 The Colchagua Valley, sub valley of Rapel, is one of Chile's best known wine regions. Located 130 km (80 mi), southwest of Santiago, the vineyards are naturally protected by the Andes Mountain Range to the east and the Coastal Mountain Range to the west, where the Cachapoal and Tinguiririca (Colchagua) Rivers flow. Most vines are planted in the central part of the valley, although there are plantations on the foothills and near the sea. It has received many awards for its full bodied Carmenère, Syrah, Malbec and Cabernet Sauvignon wines that conistently excel in world rankings, and the American magazine Wine Enthusiast granted it the "Wine Region of the Year Award 2005", consecrating it as the best winemaking region of the world of the year. Colchagua has clean, transparent skies that allow perfect and optimal solar radiation. Its Mediterranean climate, characterized by four clearly defined seasons, is rare, existing at only four other points around the world: the Mediterranean coast; the California coast; the Cape of Good Hope in South Africa; and the southeast coast of Australia. Low humidity, the Pacific Ocean's maritime influence and the breeze from the Andes Mountain Range alternatively, generate an ideal condition for grape growing, especially in the summer months (November - April), where thermal variation fluctuates up to 22° C (62° F); between 13° to 35° C (55° to 131° F) approximately. This allows the grape to mature slowly, with a long growing season and therefore achieving a long molecular chain which is responsible for the aroma and taste of the fruit.

From the outset in 1997, the aim of MontGras’ Ninquen Project was straightforward: to produce the finest red wines in Chile. This bold mission was

Via MontGras, in Chiles Colchagua Valley, was established in 1992 by brothers Hernn and Eduardo Gras, together with their partner Cristin Hartwig. The fruit of

" Deep ruby red with purple notes. The nose is invaded by tons of blackberry complemented with touches of spice, cedar and vanilla from

" Grapes are hand-harvested the second week of April.Fermentation takes place in temperature-controlled stainless steel tanks. After a 26-day maceration period, 100 of the Cabernet