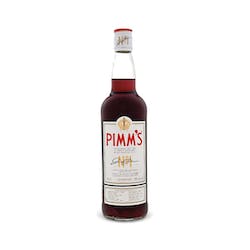 Pimm, a farmer's son from Kent, became the owner of an oyster bar in the City of London, near the Bank of England. He offered the tonic (a gin-based drink containing a secret mixture of herbs and liqueurs) as an aid to digestion, serving it in a small tankard known as a "No. 1 Cup", hence its subsequent name. Pimm's began large-scale production in 1851 to keep up with sales to other bars. The distillery began selling it commercially in 1859 using hawkers on bicycles.[dubious ] In 1865, Pimm sold the business and the right to use his name to Frederick Sawyer. In 1880, the business was acquired by future Lord Mayor of London Horatio Davies, and a chain of Pimm's Oyster Houses was franchised in 1887.

Pimm's No. 1. Pimm's No. 1 is a gin-based liquor made in England from dry gin, liqueur, fruit juices and spices. It was created in

Pimm's No. 1. Pimm's No. 1 is a gin-based liquor made in England from dry gin, liqueur, fruit juices and spices. It was created in