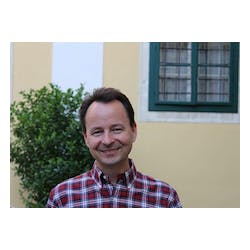 The Zwettl Monastery was founded in 1074 and in 1171 the Monks of Zwettl were granted their first vineyards: Heiligenstein & Gaisberg–the oldest documented sites in the Kamptal. The estate and Castle Gobelsburg was controlled by as many as 19 different families between 1074 and 1740, and in 1786 absorbed the famous Kammern Winery and vineyards. Two hundred years later Eva and Michael Moosbrugger were granted the winemaking and viticulural contract in 1996, and with the help and guidance of Michael's mentor Willi Bründlmayer, the winery has regained its prestige and considered to be a leader in quality and innovation. In 2006 Michael Moosbrugger was awarded as 'WINEMAKER OF THE YEAR' by the Austrian magazine Falstaff, the highest award given to an Austrian winemaker, and in 2009 and 2010 the estate was acknowledged as 'ONE OF THE TOP 100 WINERIES OF THE YEAR' by Wine & Spirits Magazine. Schloss Gobelsburg maintains a large number of parcels in Erste Lagen, or 1st Growth, vineyards in the Kamptal, including the mineral-rich, crystalline slopes of the Gaisberg and Heiligenstein planted to Riesling, and the deep loess soils of Renner, Grub, and Lamm planted to Grüner Veltliner. The winery continues to utilize organic winegrowing and has benefited from the fact that the monks of Zwettl Monastery began these practices as early as 1958. While many international cellars are attempting to produce clean, uniform wines, Moosbrugger is convinced that the future Gobelsburg lies in individuality and character. As a high level of technology is necessary to warrant uniformity, Moosbrugger believes that individuality can only be achieved through the reduction of machines. Moosbrugger developed the 'Dynamic Cellar Concept' for Gobelsburg in which wines are no longer pumped from one location to the other, but transported in 'barrels on wheels' from one section of the cellar to the other. A hallmark of the estate are the 'Tradition' bottlings of Grüner Veltliner and Riesling. Having read the meticulous notations of the Cistercians at the estate over the past 150 years, Michi pays homage in his role as cellar master, responsible for the 'education' of his 'pupils' –wine- while leading them through elevage; as opposed to acting as 'winemaker,' whose decisions in present day Austria are generally to preserve aromatics and fruit through extremely reductive methods. Vineyard area: 49 hectaresTop sites: Heiligenstein, Gaisberg, Lamm, RennerSoil types: Volcanic sandstone, mica slate, and alpine gravelGrape varieties: 50% grüner veltliner, 30% riesling, 8% zweigelt, 12% pinot noir Farming Practice:Sustainable

James Suckling 90 "This well-structured and crisp gruner veltliner shows plenty of green bell-pepper, green-bean and green-pepper character. A little short, but lots of character and

Tasting Notes "Very light in colour and some nougat and Turkish honey notes. Cool and refreshing. Lean and piquant despite the dominance of Zweigelt, this wine

James Suckling 91 "Attractive lemon and white-peach nose with hints of green apples and fresh herbs. Juicy, mid-weight palate with a lot of character and a

Wine Enthusiast 89 "Slight notes of mirabelle are touched up with lemon freshness on the nose. Some yeasty notes still swing on the slender, fresh palate

Wine Enthusiast 90 "Tart strawberry notes on the nose signal immediate refreshment. The slender, dry palate is made all the more lively with spritz which accentuates

Wine Enthusiast 90 "Ripe pear, lemon zest and salty yeast on the nose signal freshness and savoriness. The palate is lively with slight spritz and lemon

Wine Enthusiast 90 "Pure citrus rises from the glassthink mandarin and ripe lemon zest. The palate is juicy and bright with ripe lemon freshness. The finish

Wine Enthusiast 90 Best Buy "An earthy touch combines with the ripe lemon-zest notes on the nose. The palate focuses purely on lemon with a lip-smacking juicy

Wine Enthusiast 91 "Yeast, miso and green pear make for an appetizing nose. The evident spritz on the palate makes these flavors pop even more in

Wine Spectator 93 “Peach and grapefruit flavors hold court in this focused white, picking up accents of floral, apple and mineral. Intense and long, with

Wine Spectator 90 "An aromatic style, boasting lilac and freesia accents. Apple and grapefruit notes prevail as this elegant white winds down on the graceful finish.

Wine Enthusiast 90 Best Buy "Loads of fruit show on the nose of this wine: green and red apple, strawberry and ample, zesty citrus. The palate is

Wine Enthusiast 92 "How can such lightness, such supple slenderness, come with such full flavor? Visions of swirling citrus are made manifest here. Mandarin, kumquat, tangerine:

Wine Enthusiast 90 "A slight note of pear drop plays on the nose. The palate is juicy and vivid with citrus, green pear and some white

Vinous Media 97-98 "This latest---indeed, greatest--in Michael Moosbrugger’s memorable ongoing series of explorations into how and why his mid-20th century predecessors and their forebears “raised” wine,

Wine Spectator 92 "Offers ripe aromas and flavors of beeswax and sage honey, with kiwifruit, melon and white currant hints. This has some dried mango notes,

Wine Advocate 95 "Believe me or not, but the 2012 Riesling Tradition, which keeps its true origin as a useless secret (Niederösterreich), is the finest and

"New life breathed into an old monastic estate, with Willi Brundlmayer as consultant. The wines are excellent VALUES while Michael "Michi" Moosbrugger consolidates his reputation.

"New life breathed into an old monastic estate, with Willi Brundlmayer as consultant. The wines are excellent VALUES while Michael "Michi" Moosbrugger consolidates his reputation.