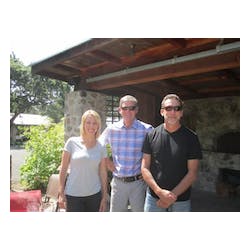 "Grassi is a small, estate Cabernet Sauvignon producer from Atlas Peak in Napa Valley. Mark Grassi is originally a builder by trade, and he is responsible for the construction of many of the wineries in the valley, including Ovid. He bought this plot of land in 1989 and, in 2002, with the help of Harlan vineyard manager Mary Maher and Peter Franus of Franus Wines, Mark and Jami Grassi planted their first Cabernet Sauvignon vines. The property sits on a bench above the valley floor at the bottom of Soda Canyon Road in the Atlas Peak Appellation. The vineyard site was once an ancient riverbed, and is slightly sloping, running from east to west. In 2001, Mary and Mark discovered a mixture of soil and cobbles which range in size from thumb- to cantaloupe-sized. These cobbles keep the soil from being too fertile and additionally provide excellent drainage. Peter Franus made the first several vintages of Grassi from 2005 to 2008. As of 2009, Robbie Meyer of L'Angevin and Peirson Meyer took over the winemaking responsibilities. It is our long relationship with Robbie that happily brought Grassi into the Polaner fold, and today we are very excited to represent the wines! We think Mark Grassi says it best: "There is a saying here in Napa that it takes a lot of beer to make great wine. We can attest to the truth of this saying. More beer than we would like to admit helped get us through all the planning, coordinating, consulting, troubleshooting, worrying, waiting and wondering. Ultimately, we have created an exquisite Cabernet Sauvignon, in which 100% of the fruit comes from the vineyard on our Soda Canyon property. I must confess that there has been a lot of physical and emotional labor involved in making Grassi Cabernet Sauvignon, but it has been a labor of love."

Wine Advocate 94+ "The 2010 Cabernet Sauvignon is dark, rich and totally enveloping. Dark cherries, plums, mint, cassis and chocolate all come to life in a