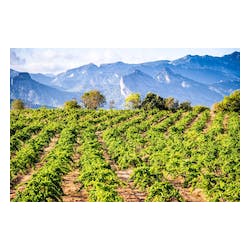 Nuria Altes, like many other young vintners in Spain, comes from a family who has grown grapes for generations. Tucked away in a remote corner of Catalunya, Nuria's new project, Herencia Altes is situated outside the village of Batea, in Terra Alta, a little known DO southwest of the Priorat. Remarkably Terra Alta is one of the largest wine growing regions in Cataluyna and one, of which few are aware – something Nuria has set about changing. Having grown up in the vines that her grandfather tended, Nuria has known these vineyards since her childhood and made the decision in 2010 to stop selling her fruit to the local cooperative and to instead make her own wines. In this project she is assisted by her partner Rafael de Haan and together they inaugurated a new cellar for the 2016 vintage located in her hometown of Batea.

Nurias most widely planted red variety is the indigenous Garnatxa Negra which grows well in the sandy and clay limestone soils of the region. By

Wine Advocate 89 "The just-bottled 2017 Garnatxa Blanca is a young, fruit-driven, clean and fresh unoaked Garnacha Blanca. It's surprisingly balanced and fresh for such a

Vinous 90 "Juicy, focused and lithe on the palate, offering appealingly sweet boysenberry and cherry flavors that deepen steadily through the back half. Shows strong intensity and

Vinous 90 Juicy, focused and lithe on the palate, offering appealingly sweet boysenberry and cherry flavors that deepen steadily through the back half. Shows strong intensity

Wine Advocate 92 "Produced with a specific strain of Garnacha, Garnacha Peluda or hairy Garnacha, the 2015 La Peluda is a new bottling from lime and

Wine Advocate 93+ "The 2015 La Serra Negre is a blend of old-vine Cariñena with 20% Garnacha from a single vineyard that names the wine. I

Robert Parker 90 "Wow! $10 is the full retail, so I suspect readers may be able to purchase this beauty for a discounted price of $8-$9