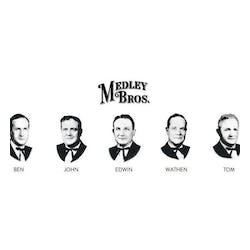 The Wathen-Medley family has been distilling premium bourbon for 8 generations, beginning more than 100 years before prohibition. When the 21st amendment was ratified in the winter of 1933, Thomas Aquinas Medley began distilling and releasing unaged spirits to get started, much like the whiskey producers of today. Thomas Aquinas Medley first produced bourbon and sold it as a 30 day old spirit. This was a far cry from his aged bourbons of pre-prohibition, but people were ecstatic! Next came a 60 day bourbon. And so it went until sufficient reserves had been built and a sufficiently aged bourbon could be offered. After Thomas Medley's death in 1940, the next generation of Wathen-Medleys boys stepped up to bat. They realized that within their warehouse where their whiskey matured, were "sweet spots" that created a superb bourbon to the rest. While much of their whiskey was sold in bulk to larger whiskey houses, R. Wathen-Medley "cherry picked" these single barrels of superior quality and branded them under the family name, Wathen's "Single Barrel" Straight Kentucky Bourbon. Fast forward 70 years... Today the company is run by the 7th and 8th generation Wathen-Medley boys, Sam and his Father Charles. A low rye mash bill is used to create these high quality Kentucky Straight Bourbons. The father and son team produce Wathen's "Single Barrel" Straight Kentucky Bourbon and the recently released "Old Medley." "Old Medley" 12 yr bourbon is a richer, sweeter style of bourbon with a lower ABV to allow the spirit and age of the whiskey to really shine. The name andthe recipe have risen from the ashes of American history and put back in bottle nearly a century later. The recipe remains unaltered although the Old Medley of today has had the opportunity to mature to its full potential.

" The Wathen-Medley family has distilling premium bourbon for 8 generations, beginning more than 100 years before prohibition. When the 21st amendment was ratified in

" The Wathen-Medley family has distilling premium bourbon for 8 generations, beginning more than 100 years before prohibition. When the 21st amendment was ratified in