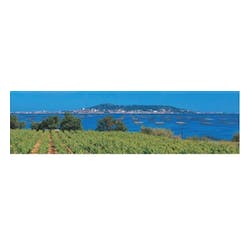 Founded in 1932, the Les Costieres de Pomerols is located in the top commune of Pomérols, located between the garrigue of Pezenas and the sea dominated by the Mont St Clair in Sete. The co-op has merged with the Cave de Castelnau de Guers. They include 320 members and produce 55,000 hectoliters of wine (600,000 cases). The members control 1,200 hectares of vineyard land (2,964 acres) of which 330 hectares (815.1 acres) are Picpoul de Pinet. Six communes are entitled to the name Picpoul de Pinet: Florensac, Pomerols, Pinet, Castelnau de Guers, Montagnac, Meze. The Pomerols vineyards stretch over vast sun-light terraces with clay/calcareous soils.

"This dry white wine from the underrated Picpoul variety is a clean, crisp, racy, fruity young wine with hints of minerals and herbs. It certainly