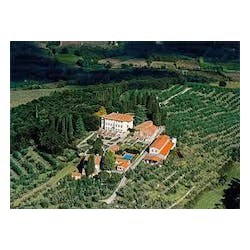 Petrolo is the definition of a cult winery, with an owner and a story that have helped create its legendary status. Though virtually unknown even in the wine world, the Valdarno di Sopra denomination dates back to the days of the Medici family during the Renaissance, and the area has always been renowned for the winemaking potential of the tiny area of Tuscany near Chianti in which it is located. In more recent times, Petrolo was bought in the 1940s by Gastone Bazzocchi, who was the first person to begin cultivating high-quality Sangiovese-based wines at the estate, but it is his grandson, Luca Sanjust, who has brought the winery the cult status it enjoys today. An art scholar and successful painter in his own right, Luca decided to change paths in the early 1980s and has dedicated his time and passion to Petrolo ever since. In the last fifteen years, Petrolo has established itself as one of Tuscany's, and Italy's, great wineries. The estate produces Torrione, a wine made predominantly from Sangiovese; Boggina, pure Sangiovese from a single vineyard; and Galatrona, a 100% Merlot that enjoys international renown among wine collectors and enthusiasts. Petrolo has a remarkable track record of producing some of the finest examples of these two very different native and non-native varieties. While Galatrona deservedly receives fireworks in the press and is part of the history of Tuscany's quality revolution in the late 1980s and 1990s, Torrione and Boggina are an equally thrilling success – Sangiovese from a special area that long ago was left just outside Chianti Classico, and today produces wines of distinct regional identity.

Wine Spectator 96 "A concentrated red, with an earthy, savory side contrasting its plum and blackberry fruit. A broad swath of tannins makes its presence felt

Wine Advocate 95 "Despite the hardships of the vintage, Luca Sanjust and the team at Petrolo poured all their focus and attention into creating this wine.

Wine Spectator 95 This is full of enticing blackberry, blueberry and plum flavors, with a spine of acidity, iron accents and beefy tannins. Long and well-proportioned,

Wine Advocate 88 “In homage to the all but forgotten Val d’Arno di Sopra appellation, the 2012 Inarno shows a fascinating bouquet with dried herbs, blue

James Suckling 99 "This is a phenomenal pure merlot with blueberries, raspberries and hints of milk chocolate. Some nutmeg too. Full body with very fine yet

James Suckling 94 " There's a beautiful purity of fruit to this young red with currants and raspberries on the nose and palate. It's full-bodied with

Wine Advocate 96 "A massive expression of Merlot, the 2010 Galatrona is heaven-sent. The layers are infinite here spanning dark fruit, spice and chocolate. I fall

Wine Advocate 93 "The 2010 Torrione is exception and a very reasonable value. It opens with elegant richness and soft tones of black cherry, licorice, spice

James Suckling 97 “Amazing aromas of black truffles, crushed blackberries and dark chocolate. Dried flowers too. Full-bodied, with wonderful fruit that is layered and gorgeous. The