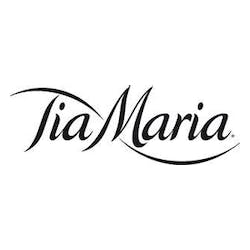 Tia Maria is a dark liqueur made originally in Jamaica using Jamaican coffee beans. The main flavour ingredients are coffee beans, Jamaican rum, vanilla, and sugar, blended to an alcoholic content of 26.5%. The historical fable of its origins dates it to the 18th century. A young Spanish girl was forced to flee Jamaica, and the family plantation during a conflict. She was accompanied by a sole servant who carried a bit of jewelry and the recipe for the family liqueur. In honor of the woman's help, the girl named the liqueur "Tia Maria" (tia is Spanish for "aunt"), her name for the woman who had helped save her life. One account of its history says that a man named Dr. Evans discovered the drink after World War II, and he began reproducing it. This story of Dr. Evans devotion to the drink is part of the official website's history, however.[1] According to some sources, it was actually created in Jamaica in the 1930s.

Tia Maria has a new look, but the recipe remains the same. It is a unique blend of 100 Arabica coffee beans and premium Vanilla. By using