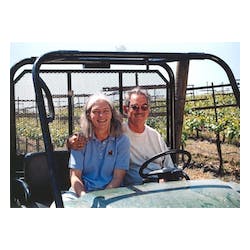 "I love making wine. From that first harvest in 1983, working the nightshift for Cathy Corison at Chappellet, I knew there was no doubt. Up to that point, I knew that having wine as a part of a meal with friends made that meal and that get-together something extra special, but until I worked in a cellar with grapes, wine, barrels, hoses, pumps, and other equipment, I didn't know how much I would love actually making wine. After receiving my degree in Enology from U.C. Davis in 1984, I worked my way up from the cellar to assistant winemaker and then to winemaker. I worked at Chappellet and Robert Pepi. I then left the world of regular employment and began consulting in 1990. I've consulted for Spottswoode, Araujo, Viader, Fisher, and Dalla Valle. Not long after I began consulting, I started my own brand, Selene Wines."-- Mia Klein, Consulting Winemaker and Proprietor/Winemaker of Selene Wines The Selene name comes from Greek mythology. There are three goddesses associated with the moon in this mythology; Artemis, the maiden goddess of the waxing moon, Selene, the mother goddess of the full moon, and Hecate, the wise crone goddess of the waning moon. The moon carries a lot of meaning and symbolism for Mia, not the least of which is following its phases. By knowing whether the moon is new, first quarter, full, second quarter, new, etc., she knows where to find it in the sky, when it rises, and when it sets. For Mia, it's another anchor that connects her to the workings of nature, like the fall and spring equinox and the winter and summer solstice. Selene's output is exclusively focused on the Bordeaux varietals that thrive in great Napa Valley vineyards. Merlot and Sauvignon Blanc have been produced since 1991 and 1992 respectively. Cabernet Sauvignon and a Bordeaux blend (based on Cabernet Franc) called 'Chesler' have been produced since 2002. Chesler is a tribute to Mia's mom, Eileen Chesler, and sports a label with her picture from the late 1940's. With each release, Selene's goal has been to capture forward fruit flavors and vibrancy from the vineyard, and use minimalist winemaking techniques to frame the wines with extremely supple textures. The resulting wines are food-friendly. They are open and accessible upon release, and yet they have the necessary balance and complexity to enhance either home cooking or haute cuisine. Food and Wine's 2003 Winemaker of the Year "Klein's proprietary red wine cuvee is named after her mother, and has an adorable picture of her as a young woman skiing." The Wine Advocate, Dec. 2007 "Mia Klein's proprietary blends, dedicated to her mother, are all blends of Bordeaux varietals." The Wine Advocate, Dec. 2009

Wine Spectator 91 "Distinctive and exotic, with plenty of fragrant honeysuckle and marigold aromas. The core of apricot and mango flavors is fleshy and lively. Spicy

"100% Cabernet Sauvignon from the Dead Fred Vineyard. That name always brings a smile to my face. Fred (RIP) was the beloved cat of the

Wine Advocate 92 "The 2007 Chesler, while much less evolved, displays the greatest potential of any of these wines. Its dense ruby/purple color is followed by

Wine Spectator 92 "Dense, rich and savory, with loamy herb, anise and sage-laced currant and blueberry flavors that coat the palate and offer depth and persistence,

Wine Advocate 92 "Displaying even more style and elegance, the 2004 Chesler exhibits a deeper ruby/purple color along with opulent, full-bodied flavors of creme de