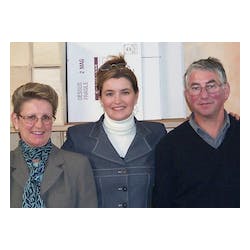 Jean Milan (OGER)Oger sits in a bowl between the hills of Mesnil and Cramant, and the chardonnay in this village basks in the extra warmth. Caroline Milan is the 4th generation of the family to direct this estate; it was founded in 1864 by Jean Milan, her great-great-grandfather. Today Milan controls six hectares of vines averaging 43 years, spread over 42 different parcels, all in the grand cru of Oger."Oger received its rightful Grand cru status in 1984, when that last, vital percentage point arrived. The village, which stands almost entirely upon Belimnite chalk, is often forgotten among its more famous neighbours. The difference between Oger and Le Mesnil-sur-Oger is mostly due to Oger's much younger vines, but the wines have a classic Chardonnay character. The best grapes come from the same long stretch of southeasterly slopes as Avize and Le Mesnil-sur-Oger. The village surely hides a whole chest of treasures among its growers and is therefore well worth investigating first hand. Henry Milan is one of few clever, visionary growers in Oger." -Richard Juhlin, 4000 Champagnes "The wines have less blossom and more ore than other Côte des Blancs Champagne. They are lead-pencil-y, penetrating and (relatively) powerful. It's also something of an insider's tip, as at least one proprietor with vines in more "famous" land confided his secret favorite terroir in the Côte des Blanc was in fact Oger! Milan's is a small domaine, 6 hectares spread out among 42 parcels."