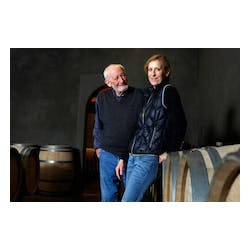 "This is an irrefutable source of remarkable Cabernet Sauvignons that last 20-30+ years! Cabernet enthusiasts who have not yet discovered Philip Togni should be on a crusade for his wines, which will handsomely repay extended cellaring." -Robert Parker, The Wine Advocate There are few winemakers still living with the kind of history that Philip Togni has under his belt. Long before his eponymous winery was even conceived, he was crafting some of the most iconic wines in California. After a year at Mayacamas (1959), he became the founding winemaker for Chalone, worked at Inglenook for a year, became the founding winemaker for Chappellet (producing the acclaimed 1969 Cabernet Sauvignon that is still regarded as one of the greatest ever produced in California), and finally at finished out the 1970's at Cuvaison. In 1981, while still employed at Cuvaison, he began planting his own vineyard on Spring Mountain and it is here that he has cemented his legacy. Starting with the 1983 vintage he has produced an unbroken string of world class wines; age-worthy, classic, and incredible. Although Philip is still very involved, since 2007, his daughter Lisa has taken the lead more and more. The good news is that she shares her father's gift for winemaking and shows no interest in changing anything at this venerable estate. While the trends have ebbed and shifted throughout the past three decades, Philip and Lisa have remained true to the style that made the name Togni legendary. It's a thrill to taste these wines, knowing you are tasting history in the making. Legendary. Iconic. Benchmark. These are words that can only truly be earned with time, and Philip Togni Vineyard has earned the right to use them all.

A true Napa legend, the Philip Togni Vineyard Cabernet is an ageworthy, classic style of California Cabernet. Each bottle has decades of potential and shows

"This is cabernet for those who dont want training wheels. That acidity and food-friendly astringency are, in effect, coming through as black licorice to accent

Vinous Media 100 "A majestic, towering wine, the 2013 Cabernet Sauvignon Estate is even more striking in bottle than it was from barrel. Deep, unctuous and

Vinous Media 100 "A majestic, towering wine, the 2013 Cabernet Sauvignon Estate is even more striking in bottle than it was from barrel. Deep, unctuous and

Vinous Media 97 "The 2012 Cabernet Sauvignon is stunningly beautiful, especially in the way it brings together intense, voluptuous fruit and structure. Racy and polished

Vinous Media 94 "Pine, menthol, savory herbs, licorice, dark cherry and plum notes emerge from the 2011 Cabernet Sauvignon. With time in the glass, the 2011