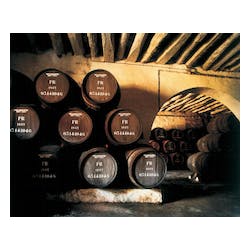 The history of the Warre family in Portugal dates back to William Warre, who was born in India in 1706, where his parents and grandparents were long established members of the East India Company. In 1729, he arrived in Portugal and became a partner in the export company, Messrs. Clark, Thornton & Warre, which exported Portuguese wine among other goods. By the close of the 18th century, Warre's had become one of the leading companies in the Port wine trade. His grandson, another William Warre, continued and grew the business while also maintaining an outstanding military career, contributing substantially towards the recovery of Portugal's independence. The Symington family's ancestry in the Port trade spans a period of over 350 years, through 13 generations. They are descended from Andrew James Symington and Beatrice Atkinson who were married in Oporto in 1891. Andrew James arrived as a young man from Scotland in 1882 and was admitted to partnership in the firm of Warre & Co. in 1905 and in 1908 he became the soul owner of Warre & Co. Currently six members of the Symington family (five from the 13th generation in the Port trade) are actively involved in Warre's day-to-day management, with the dedication and long-term commitment that are unique to a family-run business. From the vineyards through the winemaking, aging, and blending, a member of the family is directly responsible for every bottle of Warre's Port produced. The family's commitment to its wines is stronger than ever after 350 years, an unparalleled tradition in the Port trade.

Wine Advocate 90 "The non-vintage Warrior Reserve is a more fruit-driven, less complex style of port. Big, full-bodied, muscular and rich with lots of red and

Deep-colored, dark red center with just a hint of age showing through on the darkred rim. The backbone provided by the large Touriga Nacional component

Wine Spectator 91 "Lovely floral aromas of berries, violets and minerals. Full-bodied, with firm tannins and a racy finish. A harmonious yet well-toned Warre. Reminds me

Wine Enthusiast 93 “Cavadinha is the quinta that forms the backbone of Warre's Vintage Ports. With its high elevation, it imparts the cool, dry style of