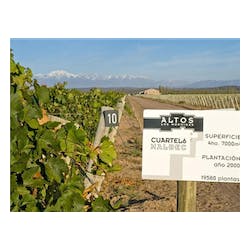 Wine from Mendoza is more than just Malbec: it is the reflection of a know-how, a tradition and an origin. Founded in 1995 by a consortium of prominent Italian winemakers, including Alberto Antonini of Antinori and Antonio Morescalchi, Altos Las Hormigas has always been evolving. Their Terroir Project is working towards the creation of an appellation system in Mendoza, while showing Malbec's diversity of expression according to its origin. Based on this philosophy, their portfolio shows the tremendous versatility of the Malbec, from fresh, fruit driven Mendoza Clásico from Lujan de Cuyo to the structured and mineral Malbec Reserve from the Uco Valley. Along with Malbec, Altos Las Hormigas has been crafting Bonarda for 10 years, Argentina's second most planted variety. They display its joyful and delicate nature under the classic line Colonia Las Liebres. In 2012, Altos Las Hormigas took a significant step in their ongoing evolution from boutique value winery to the terroir-driven, serious player in the world of Malbec that they are today. After seeing the potential for wines of consequence in the Uco Valley, the team decided to stop using new oak and small barriques for all of their wines; instead going with older, untoasted, large oak foudres across the board. This decision has allowed for much more expression and elegance, especially on the sublime Appellation series of Malbec, which features the limestone-driven Uco Valley sites of Gualtallary, Altamira, and Vista Flores. They've teamed up over the past decade with Pedro Parra, PhD in Terroir, to use various techniques to find both the ideal sites for their wines as well as a way to measure the ideal ripeness of their fruit. With Parra's guidance, the team at Altos Las Hormigas has dug over 1,500 soil pits in the Uco Valley, chasing the chalky Mendoza gold that is limestone, which imparts a beautiful minerality to Malbec. In Gualtallary, Altamira, and Vista Flores, they have found the limestone trail, where the vineyards have shallow topsoil and the vines dive deep into the calcareous mother rock. They also use electromagnetism to map out the soil depth of their vineyard sites so that they can avoid picking a whole block where, due to the warm and hilly vineyards of Mendoza, there may be some underripe and overripe grapes in addition to the ideally ripe grapes. Instead, they use that information to harvest in irregular polygons, and pick the fruit with ideal ripeness in every section.

Wine Advocoate 94+ "The limestone starts in the Reserva/Reserve range, of which I tasted the 2018 Malbec Reserve, which is produced from vineyards on limestone soils

Wine Advocate 96+ "After some ups and downs in past vintages, the 2017 Malbec Appellation Gualtallary is every bit as good as the already superb 2017.

Wine Advocate 90 "The 2017 Tinto is an unusual co-fermentation of Bonarda and Malbec and some 7 Semillon grapes, fermented in stainless steel and kept in

Wine Advocate 96 "My favorite of the collection, the 2016 Malbec Appellation Gualtallary is a wild and structured expression of the grape, place and vintage. Produced

Wine Advocate 92 "The introduction to the Valle de Uco is the 2016 Malbec Terroir Valle de Uco, which has grapes from La Consulta and Tupungato.

James Suckling 89 "A fresh and clean wine with berries, lemons and hints of stones. A medium body and a delicate finish. Drink now. Publish

Tim Atkins 96 Master of Wine "“The Altos team only made one Appellation wine in 2015, alas, but it’s still a very impressive release, sourced from

Wine Advocate 94 "The 2015 Malbec Reserve was produced with grapes from limestone-rich soils in Altamira and Gualtallary. It fermented with indigenous yeasts and matured in

Wine Advocate 95 "The other appellation Malbec comes from the hottest place (not in temperature, but in terms of market demand) in the Valle de Uco,

Wine Advocate 89 "The juicy and unoaked 2014 Malbec Clásico has a captivating, perfumed nose of violets, lilies and ripe cherries. It's all berries and flowers

Tim Atkins (Master of Wine) 92 "Tim Atkin wrote: “Like all of the Altos reds, this Gualtallary Malbec shows very little oak on the nose or

Wine Advocate 93 "There is quite a jump in price for the 2014 Malbec Reserve. Here the grapes are grown on chalky soils with round stones

Wine Advocate 94 "There are two separate wines from appellations in the Uco Valley, one of them the 2014 Malbec Appellation Altamira that comes from one

Tim Atkins 96 Master of Wine “The most aromatic and the most refined of Altos’ sub-regional Malbecs, this is sourced from comparatively young vineyards. Scented, subtle

James Suckling 90 "A spicy and fruity malbec. Shows the new style that people like. And an excellent price. Drink and enjoy." " Valle de Uco Terroir

Tim Atkins MW 91 “Sometimes referred to as the winery’s “classic” Malbec, this comes from vineyards in Luján as opposed to the Uco Valley. It’s soft

Wine Advocate 95 "Seeing the differences between the Appellation Malbecs in 2013 is splitting hairs. The 2013 Malbec Appellation Altamira is sourced from the alluvial terraces

Wine Advocate 93 "he spicier of the appellation Malbecs might be the 2013 Malbec Appellation Vista Flores, also a little riper with juicy cherries and hints

Wine Advocate 93-95 “The 2012 Malbec Appellation Altamira is produced from 100% Malbec from four different vineyards in Altamira in the Uco Valley, two of them