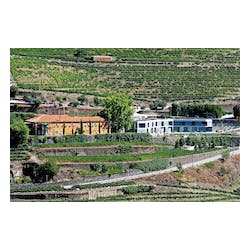 Quinta do Vallado estate, now in its sixth generation, has been family-owned since 1716 originally owned by the legendary Doña Antonia Adelaide Ferreira. Today the winery is owned by João Ferreria Alvares Ribeiro, Francisco Ferreira and Francisco Olazabal. It is one of the oldest and most famous "Quintas" in the Douro region. Two thirds of the vineyards are planted in terraces with a single row of vines and pruned according to the double cordon system. The old vines, which make up almost 40% of the vineyards are at least 80 years old. A new state-of-the-art winery was built in 1997 and a newly built, ultra-modern hotel was completed in 2012 making Quinta do Vallado a travel destination in the Douro Valley.

Wine Enthusiast 91 "Wood aged for seven months, the wine is lightly spicy and toasty as well as full of ripe tropical and apple fruits. Gouveio,

Wine Enthusiast 90 The Vallado vineyards along the Corgo river valley give a richly structured wine, packed with elegant berry fruits, balanced tannins and acidity and

Wine Spectator 91 "Concentrated blueberry and blackberry flavors are supported by fresh acidity and firm tannins. The Asian spice notes are intense, lingering into the powerful,

Wine Spectator 96 "Sinewy yet refined, with impressive power behind the firm, crisp flavors of dark plum, olive and boysenberry, matched to notes of tarragon. Presents

Wine Spectator 90 "Essence of blackberry and raspberry, with interesting accents of sage and tarragon. Offers understated power, with a fresh acidity that keeps it all

Wine Spectator 94 "Seductive and refined, with a beautiful aroma of Asian spice, cassis and chocolate with flavors to match. Broad and lush, with plenty of