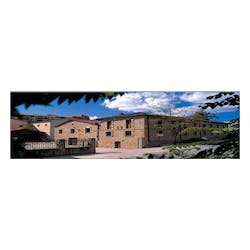 Founded in 1982, when Julian Murua Entrena revived his father, Jose Murua's winery, which dates back to 1926 in the heart of the Rioja Alavesa (one of the three sub-regions that make up Spain's Rioja appellation). The cellars are in the quaint, historic village of Elciego, which is renowned for being surrounded by some of the best "terrior" in Rioja. The name "Muriel" comes from the combination of the family name, Murua, and the name of the town itself, Elciego. Today, Julian and his son Javier run the winery with the mission to meld the long-held winemaking traditions of the region with new technologies and techniques in order to make wines that express the "best qualities" of the grapes coming from these fertile Riojan vineyards. Like most of red wines in the region, all Bodegas Muriel wines are 100% Tempranillo, the "signature" grape of the region. Due to the special micro-climate of the region, there is a triple influence from the Mediterranean, Continental and Atlantic climates, which helps the vines produce very aromatic and elegant wines, whose main characteristic is the potential to age.

"Classic ruby red with hints of a light brick red colour. Very complex and intense aroma, with fine scents of aging which are assembled perfectly:

James Suckling 92 “Floral and subtle fruit character on the nose follows through to a full medium body, soft and silky tannins and a flavorful finish.

James Suckling 92 Floral and subtle fruit character on the nose follows through to a full to medium body, soft and silky tannins and a flavorful

Red ruby color with a distinctive brick orange rim. It has an aromatic explosion of fine oak (vanilla, coffee, and spices), very mature fruit such

Decanter 95 “Lovely; so complex and intriguing, improving through to the finish. A great, classic Rioja.” –PBT “Menthol and eucalyptus nose, then more classic aromas. Ripe and