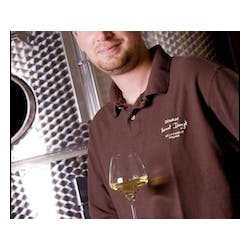 The Dampt family has a long and illustrious tradition of winemaking in Chablis, with Daniel Dampt and his grandfather Jean Defaix both owning highly regarded estates in the region. Daniel's son, Vincent, grew up in this world of Chardonnay and decided to follow in the family's tradition by enrolling himself in wine school at the young age of 14. After graduating, he trained for a short time in the Jura before gaining a position at none other than Domaine Leflaive in Puligny-Montrachet. In 2002, after finishing his training at Leflaive, Vincent began working with his father as winemaker for the family's estate. After two years, he inherited a few small plots of vineyards, enabling him to create his own domaine. With full control over aspect of farming and winemaking, Vincent truly came into his own as a top tier producer in Chablis with wines that speak of precision and elegance. Vincent's Chablis vineyards are exquisitely situated on the left bank of the Serein river, on the famous Kimmeridgian marl; a mixture of clay, chalk and marine fossils. For his village and premier cru wines, Vincent vinifies exclusively in tank to preserve every bit of the classic Chablis cut and minerality. With his micro-production Grand Crus, he ferments and ages the wines in older barrels. The fruit for these wines comes from prime parcels in Valmur and Les Clos, showing every bit the majestic qualities that have made these vineyards legendary. With his minimalist approach in the cellar, Chablis rarely is able to express itself with such clarity. Farming Practice:Sustainable

Wine Enthusiast 95 Best of the Year Print text to follow when the hard copy is released. Tasting Notes "A pleasing, full-bodied wine comes from an exceptional terroir

Decanter 94 "An interesting contrast with the wine made by his brother Sébastien, Vincent Dampt's wine sees 20% new oak and is sourced from a 0.4ha

Tasting Notes From vines located on a plateau above the town Chablis, the wine is fermented in temperature-controlled stainless steel with selected yeasts and without any

Allen Meadows 91 "An attractively layered nose offers up pretty aromas of citrus peel, pear, oyster shell and a floral wisp. The supple, round and utterly

Wine Enthusiast 92 Online Exclusive "From the top of the slope of the Côte de Lechet, this bright and beautifully crisp wine has a strongly steely, cool