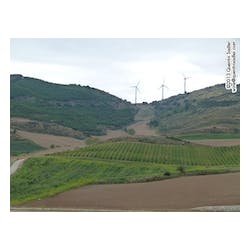 "The roots of Nekeas reach back beyond the XVII century thanks to its name and the families that own the company.Extremely valuable, ancient documents are still conserved –copies of which are on display at the Winery- which describe the "day-to-day life" revolving around vineyard and wine in ancient times. The earliest, dating from 1572, tells us that more than 142,000 litres of wine were produced in Añorbe. In another, from 1601, the first apeo (now the land register) performed in the municipality of Añorbe describes the surface area covered by vineyards that year: 1,653 peonadas, equivalent to 82 hectares.Another document from 1694 gives permission for an old vineyard pulled up due to age to be replanted, showing just how far back the characteristic regulation of vineyards in Europe goes.The law of supply and demand also dates back a long time, as demonstrated in two documents from consecutive years: 1802 and 1803. In the first year, 1,200 kg/hectare were produced and a pitcher of wine cost 6 reales. 4,000 kg/hectare were produced the next year and a pitcher cost 2 reales.In more recent times -one of the founding partners was witness to the consequences-, in 1899, phylloxera broke out in the Valley of Nekeas and devastated 300 of the almost-400 hectares of vineyards that existed at the time. In 1900, it destroyed the remaining 100."

Expression of the most Atlantic Garnacha in Spain. Vivid garnet color. Juicy and spicy on the palate with red fruit and black and white pepper

James Suckling 90 A ripe and rather complex garnacha/grenache with black raspberries and delicate wild-herb notes. Plenty of rather fine-grained tannins and a fresh, long finish

Wine Advocate 90+ Always a favorite of mine, the 2015 Vega Sindoa El Chaparral Old Vines Garnacha is a herbal, spicy and balsamic expression of the

"The 2014 Vega Sindoa Chardonnay (Barrel Fermented) is the only wine from Nekeas that is barrel-fermented, then aged four months in new and older oak.

Wine Advocate 91 "The most serious wine, as usually is the case, is their 2014 Vega Sindoa El Chaparral Old Vines Garnacha, coming from head-pruned Grenache

Wine Advocate 89 "The 2013 Vega Sindoa Chardonnay is an oak-fermented Chardonnay with strong aromatics of bay leaf and other balsamic herbs, waxy apples, aniseed and