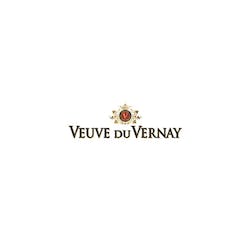 "Veuve du Vernay sparkling wine has an intimate link to the history of French sparkling wine. Mr. Jean Eugène Charmat, the French scientist, who in 1907 invented the cuve close ("sealed vats") method of producing fine sparkling wine which has since been adopted worldwide, had a high regard for a widow in the village of Vernay who helped him to start his business. When Eugène Charmat's son Robert created a new sparkling wine of high quality in the 1960s, he named it in honor of the lady whom his father esteemed so highly. Today Veuve du Vernay is a major brand and is widely known internationally. Crisp and fruity , soft , balanced finish.A great value.

"Fresh on the nose, vibrant aromas expressing a delicate blend of floral and fruit-driven notes. Rich and full on the palate, extended finish of

" Veuve du Vernay is a reflection of the French way of life; sophisticated, spontaneous, romantic, elegant and chic. A range of sparkling wines that

"Crafted from a blend of Syrah, Cinsault and Grenache, this pink French sparkler is a real sweetie in every sense of the word. Overflowing with