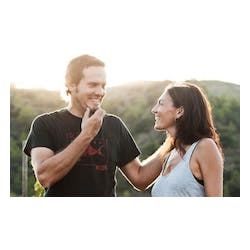 Husband and wife team Sara Pérez and René Barbier (Fils) are the children of two of the great pioneers of the Priorat D.O., Josep Lluis Pérez of Mas Martinet and René Barbier of Clos Mogador. Sara and René are both very well respected vignerons in their own right, so it seemed natural that they should start a project together. For this project, they decided to stake their claim not in Priorat, but in the slightly sleepier D.O. of Monsant. René and Sara have taken the goddess as their inspiration for this project. One of their stated goals is "to interpret femininity through a bottle of wine". This might seem an odd choice for a bodega that elaborates Grenache- and Carignan-based wines in Southern Cataluña, but it makes sense once you taste. These are incredibly elegant, refined, sensual expressions of Montsant, with restrained alcohol levels and tremendous texture. The grapes for the wines come from an approximate total of four hectares of vineyards which are owned by four different grape-growing families in Falset as well as another small plot owned by Venus. One could call Venus a négociant project, but it is more accurate to say that it is a partnership between these four families and René and Sara. Venus is these small growers' only client, so their vineyards are farmed in accordance with the rigorous ecological standards set by the couple. The grapes for Dido come from the Falset area, from vineyards with soils based on decomposed granite called sauló. These soils are poor in organic matter and they contribute to producing grapes with great ripeness and fruit flavors. The grapes for Venus come from clay-calcareous soils between Marçà and Guiamets. These soils encourage a slow, elegant and complex ripeness.

Wine Advocate 93+ "The red 2018 Dido coms from their youngest vineyards, mostly under 30 years old, on granite soils that provide freshness and tension to

Tasting Notes "If the rose has the spirit of a white, the white Dido Blanco has the structure of a red, as it macerated with skins

WIne Advocate 93+ "If the ros has the spirit of a white, the white 2017 Dido Blanc has the structure of a red, as it macerated

Wine Advocate 93+ "The red 2017 Dido shows a lot of aromas from the Syrah (always a significant part of the blend, around 20), with some

Wine Advocate 93 "Sara Pérez considers 2016 a special vintage that she likes for whites and rosés—wines with tension and a lower pH, as seen in

"80% Garnacha and 10% Syrah with small amounts of Merlot and Cabernet Sauvignon rounding out the blend. It is fermented with native yeasts and raised

Wine Advocate 92 "The red 2014 Dido had an incredibly perfumed and showy nose from a cold vintage in a cold granitic place. The palate is

Wine Information: -A blend of Garnacha, Syrah, Cabernet Sauvignon & Merlot -Dido was the founder and first queen of Carthage, according to the poet Virgil.