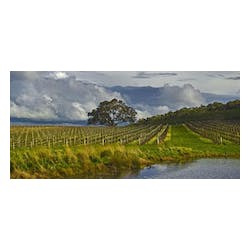 The name Thorn-Clarke represents the union between two families with deep roots in the Barossa Valley and six generations of grape growing. Cheryl Clarke's (nee Thorn) family were one of the earliest settlers in the region and have been growing grapes since the 1870s. The Thorn family property 'Clifton' is home to one of the oldest Shiraz vineyards in Australia, and perhaps the world, with earliest records for plantings dating back to 1854. It is still owned and operated by Cheryl's brother. David Clarke's family was also a pioneer in the Barossa Valley but more famously for mining gold. An ancestor, James Goddard, was responsible for opening the Lady Alice gold mine in the Barossa goldfields, the largest gold mine in South Australia at the time. A geologist by training and wine lover at heart, David set about testing soils to identify prime plots of land to acquire and plant vines. David and Cheryl's first vineyard in 1987 was Kabininge, outside Tanunda (the name means "watering hole" in aborigine). They later acquired more land in Barossa and in The Eden Valley. This took a lot of Australian pluck at that time. During the late 1980s the South Australian government was sponsoring growers to remove vines, not plant them, to manage oversupply. Following success as grape growers supplying other Barossa wineries with fruit, David and Cheryl founded the Thorn-Clarke winery in 2002 with daughter, Nicole, and son, Sam. The Thorn-Clarke family has a strong belief in the age-old saying "you can't make good wine from bad grapes." Theirs is a long term approach to serve as a custodian for the Barossa's reputation and their families' commitment to making great wines. The vineyard team focuses first on nurturing quality grapes from prime land without cutting corners. Once grapes are harvested and into the winery it's about balance: using specific strains of yeast and appropriate types of oak to create complexity without overpowering the fruit. The approach has worked, and the family has struck gold with its wines, collecting a succession of trophies and medals at international wine shows. The Eden Valley vineyard has become synonymous with high quality white wines and the Barossa with high quality reds.

James Halliday 91 "Estate-grown, crushed and destemmed, twice-daily pumpovers in the fermenter, 12 months in French oak. Deluxe treatment for a 20 wine. It is medium-bodied,

James Halliday 94 "If you think the flavours and texture of this wine more akin to the Eden Valley than the Barossa Valley, you're probably right

Vinous Media 90 "Youthful purple. Black and blue fruits, vanilla and licorice on the perfumed nose. Sweet and broad in the mouth; a peppery note adds

Wine Spectator 91 "Fresh earth, toasted cumin and black tea flavors are dark and dense, with black licorice and thick tannins forming a backdrop to the

Wine & Spirits 92 "The Clarke family farms 670 acres of vines in the Barossa and Eden valleys, which provide most of the fruit for its

International Wine Cellar 88 Bright purple. Smoky cherry and blackcurrant aromas are sharpened and lifted by a peppery quality and a hint of candied flowers.

" The palate is rich and full with spicy plums and creamy oak. The tannins are fine and give the wine great length of flavor

Wine Advocate 90 "Also outstanding, is the 2010 Shiraz Shotfire. The good news is that there are 15,000 cases of it and discounters will offer it

Wine Enthusiast 90 WE BEST BUYS 2012 Rank 12 This is a lush, full-bodied Barossa Shiraz at a bargain price ($18). Hints of charred wood accent

Wine Advocate 90 "The 2008 Shotfire Shiraz was aged for 14-16 months in 40% new French and American oak hogsheads. Purple-colored, it offers up a

Robert Parker 91 "The 2006 Shotfire Cabernet Sauvignon was aged for 18 months in French oak. Purple-colored, it offers up a fragrant bouquet of cedar, spice