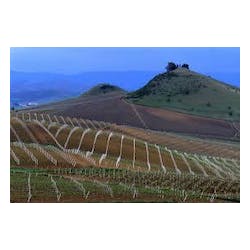 The island of Sicily is home to the Tasca d'Almerita family of estates: Regaleali, Capofaro, and Whitaker. The Regaleali estate is at the heart of the family's wine production, and also serves as an escape from the bustle of the coastal capital of Palermo. In 2002, the family purchased vineyards on the small island of Salina to create Tenuta Capofaro, which produces elegant sweet wines with high acidity yet fresh balance throughout. The Whitaker estate consists of vineyards originally planted by the English family of the same name in the 19th century. While the history of Tasca d'Almerita dates back to the 19th century, it was Count Giuseppe Tasca who started a new era for the winery and the Sicilian wine business in the late 1950s, devoting himself to the promotion of Sicilian wines and introducing a new business model based on quality and innovation rather than quantity and bulk production. He invented the winery's two flagship wines: Rosso del Conte and Nozze d'Oro.

Vinous 93 "Good full ruby. Begins rather stern, then opens with aeration to showcase precise aromas of graphite, blueberry, and violet. Medium bodied and quite tangy,

One of the most famous Nero d’Avola wines of Sicily. From the heart of the island, from gentle hills cultivated with wheat and grapes. As

Straw-yellow in color, aromas of green apples and pitted fruits complement undertones of pears and grapefruits. On the palate, crisp acidity and a rich body

This was the first wine produced by Count Tasca d'Almerita on the Regaleali estate. Primarily a blend of three Sicilian grapes: Inzolia, Catarratto, and Grecanico,

For 57 vintages, this wine has represented the estate whose name it bears. It expresses the full aromatic potential of the territory. A classic that

Bright ruby-red color, this wine offers layered notes of cherry, mulberry and raspberry. On the palate, it is complex and supple, with ripe berry flavors

Its name is Sicilian for 'L'Amore,' the Love that Tasca d'Almerita puts into its work. A selection of Nero d'Avola grapes grown on high hills,

Straw-yellow in color, aromas of green apples and pitted fruits complement undertones of pears and grapefruits. On the palate, crisp acidity and a rich body

One of the first Nero d’Avolas introduced to the American market, Regaleali Nero d’Avola is now a well-established example of this varietal from Sicily. Cultivated

" On the Regaleali Estate you can find thousands of roses, all subtly different; brought from all over the world, they thrive here. The Regaleali

For 54 vintages, this wine has represented the estate whose name it bears. It expresses the full aromatic potential of the territory. A classic that

"Made from a blend of Nerello Mascalese and Nero D'Avola harvested in September and October. The rose color tends toward violet and the wine exhibits

" Regaleali, a white wine, of quality and with character. The first wine produced by the Counts of Tasca d’Almerita on the Regaleali Estate. The

Wine Advocate 92 “The 2013 Sicilia Nero d’Avola Lamùri Tenuta Regaleali represents an impressive achievement. Grapes are sourced from vineyards between 450 and 750 meters above

"The 2012 Regaleali Bianco, a blend of Grecanico, Inzolia and Cararratto, is a delicious entry-level Sicilian white. A well-articulated bouquet melds into peaches, spices and