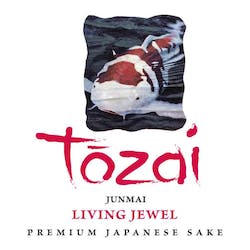 "Tozai, literally translated "East-West" in Japanese, is the result of the collaborative passion, skill, and experience of dedicated people from both Eastern and Western backgrounds. In March 2004, during a trip to Japan, Vine Connections partners Ed Lehrman and Nick Ramkowsky met with several individuals who all converged on a similar new idea: create a brand of super-premium, artisanal sake that is delicious to drink, beautifully packaged and labeled with original art work, widely distributed in the U.S., and all at a reasonable price for sake lovers and novices. After a year of diligent and creative work on both sides of the Pacific, Tozai became a reality with the first two releases (Feb. 2005), "Well of Wisdom" Honjozo and "Voices in the Mist" Honjozo Nigori. Two years later, Tozai has become a real success story in the US, but the story is not finished. Ed & Nick have always wanted to spread the gospel of premium Japanese sake to as many people as possible, and while the first two Tozai sake were a good start, they were also produced at a price higher than many sake lovers were willing to spend on the first try. So we searched for a new partner, who had the cost benefits of scale of a larger brewer, but who also had a focus and passion for great tasting Junmai sake. We found it at Kizakura brewery in Kyoto prefecture, and Tozai "Living Jewel" Junmai and "Snow Maiden" Junmai Nigori were born. Kizakura Brewery -- the Pride of Fushimi (Kyoto Prefecture) Having produced sake for just over 50 years, Kizakura brewery is a youngster in our stable of premium sake producers. They are bound by a quest for making incredible sake, whether for everyday drinking or for high-end, special occasion sake. They built their brewery in Fushimi in the southern part of Kyoto prefecture with their eye on two things: • Kyoto's especially frigid winters, called "So-ko-bi-e", are ideal for creating stable, cold temperatures inside the brewery that help keep fermentation temperatures down and extend fermentation time so that delicate flavors and aromas remain in the sake. • The local "Fushi-Mizu" or crystal clear, underground "Fushimi Water" is well known for bringing out the full flavor of the sake."