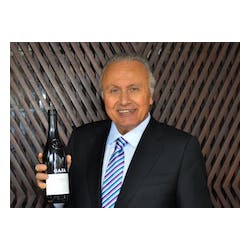 The Gaja estate's qualitative supremacy and cachet are not solely attributable to Angelo. In fact, his father's 1961 Barbaresco may be the most profound bottling of its designation ever to be produced. The Gaja name represents a legacy of quality that has evolved since the family immigrated from Spain over 300 years ago.Angelo maintained his family's high standards of production while inaugurating a new stylistic direction--more often than not through measures that incited controversy. Foremost among these was his inaugural use of barrique in the vinification of his 1975 Barbaresco cuvée. Gaja is widely credited with having instituted this practice, the objective of which is to soften the formidable tannins of the Nebbiolo grape, thereby producing a wine that is richer and more concentrated in its fruit expression than traditional models. Other early efforts included the reduction of crop size, shortened pruning of Nebbiolo vines, and decreased fermentation periods.

"Bright and deep garnet color. The nose is rich and concentrated with hints of blueberries, licorice and cocoa. The palate is fresh and juicy. Balsamic

James Suckling 93 "This is an inviting, colorful red with tea-tree oil, blueberries, violets and lavender. Hints of fresh herbs. Taut, fluid and zesty, it is

James Suckling 92 "Aromas of dark berries, licorice and sandalwood following through to medium to full body with firm tannins. A juicy and delicious finish. Drink

" Light garnet. Bright and fruity aromas with a jammy nose. A delightful wine that combines the elegance and suppleness of Merlot and Syrah with

Wine Advocate 92 Angelo Gaja always presents one of the most exciting tastings of the year. The 2013 Promis (Merlot, Syrah and a small part Sangiovese)

James Suckling 92 " Aromas of blueberry, sliced mushroom and dried flower follow through to a full body, velvety tannins and a dark-chocolate and berry finish.

"Promis- an abbreviation of the Latin word for promise, "promissio"- truly lives up to its name. The grapes are grown in the terre brune (rich,

"Promis- an abbreviation of the Latin word for promise, "promissio"- truly lives up to its name. The grapes are grown in the terre brune (rich,

Wine Spectator 90 "Bursting with pure, sweet blackberry, black cherry and spice flavors, this is not overoaked, offering a vibrant structure, with firm tannins on the

Robert Parker 93 The 2008 Barbaresco emerges from the glass with sweet red cherries, spices, flowers and licorice. This is an attractive Barbaresco with excellent depth

Robert Parker 93 "This wine reveals terrific concentration, depth and purity. This is a remarkably soft harmonious Barbaresco from Angelo Gaja with pretty notes of raspberries,

Robert Parker 96 "The 2005 Costa Russi shimmers on the palate with extraordinary grace. The wine boasts wonderful depth and richness in its dark red fruit

"A delightful wine that combines the elegance and suppleness of Merlot and Syrah with the austerity of Sangiovese. Balanced, almost musical, its a pleasure to

Wine Spectator 98 "The nose of this wine is so precise, with perfume, rose, blackberry and raspberry aromas, and the full-bodied palate builds and builds and

Wine Spectator 95 "A silky, beautiful wine, with plum and berry character. Full-bodied, with fine tannins and a caressing texture. Seductive, with layers of fruit and

Wine Spectator 95 "Wow. This is pure fruit. Aromas of raspberries, cherries and blackberries jump from the glass. Full-bodied, with ultrafine tannins and a long, long

Wine Spectator 96 "Amazing aromas of plums, strawberries, and minerals follow through to a full-bodied palate, with ultraripe tannins and a long, mineral and blackberry aftertaste.