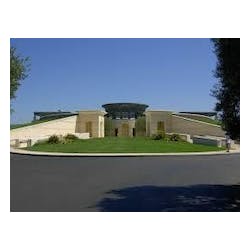 Opus One Winery is a winery in Oakville, California, USA. The wine was called napamedoc until 1982 when it was named Opus One. The winery was founded as a joint venture between Baron Philippe de Rothschild of Château Mouton Rothschild and Robert Mondavi to create a single Bordeaux style blend based upon Napa Valley Cabernet Sauvignon. It is located across State Route 29 from the Robert Mondavi Winery. The creation of this winery venture in 1980[1] was big news in the wine industry; de Rothschild's involvement added an air of respectability to the burgeoning Napa wine region. The first vintage, 1979 was released in 1984 at the same time as the 1980 vintage. For a while it was the most expensive Californian wine costing 50 USD. In 1989 a new winery was built just down the road, the first vintage from the new winery was from 1991 and was released in 1994

James Suckling 97 "Mesmerizing aromas of flowers, bark, currants and blackberries. So perfumed. You just want to smell it. Exquisite tension and finesse with an almost

James Suckling 99 F"antastic aromas that are complex and complete with blackcurrants, blueberries and herbs, such as basil and bay leaf. But always subtle. Full-bodied yet

"Initial dark fruit, spice and baking aromas in the 2015 Opus One are interwoven with seductive notes of violet, black tea, and sage. The entry

James Suckling 97 "Mesmerizing aromas of flowers, bark, currants and blackberries. So perfumed. You just want to smell it. Exquisite tension and finesse with an almost

Antonio Galloni 92+ "The 2011 Opus One may turn out to be one of the surprises of the year. A brilliant, precise wine, the 2011 impresses

Antonio Galloni 97 "One of the highlights among the more recent releases, the 2010 Opus One is flat-out gorgeous. Dark cherries, plums, graphite, cassis and pencil

"The 2009 vintage saw cool temperatures during bloom and maturation, with two short heat spells in September. The harvest began on September 21st and

Robert Parker 95 "Two of the strongest wines ever made at Opus One, the 2007 has terrific black currant fruit, licorice, incense, and subtle smoke, an

Only Three Bottles Remain Wine Spectator 97 Like the '87, there's a wonderful sense of harmony and finesse to this graceful, elegant wine. Lots of complex flavors,

" In keeping with the tradition of many great Bordeaux estates, Opus One produces a fine second wine called Overture. Since 1993, Overture has been