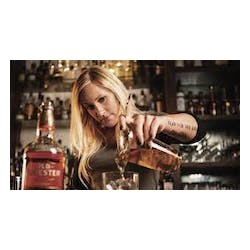 George Garvin Brown grew up in Munfordville, KY, the son of J.T.S. Brown and the half brother of J.T.S. Brown, Jr. He was the man of the house as his brother and father were off fighting in the Civil War. He was sent to Louisville to attend Male High School, though he left 6 months before graduation, likely because his family didn't have enough money to support him. He got a job as a pharmaceutical salesman selling things like quinine, laudanum, opiates, and whisky. As he called on his sales contacts, he heard continual complaints about the quality of the whisky they were prescribing. Sometimes it would be alright and sometimes it would be terrible, and there just wasn't any way to know. Whisky was still sold by the barrel back then. Bottling was expensive, so you would have to take your jug down to the tavern to fill it up instead. Sometimes things had been added to the whisky to stretch supplies or adulterate it in some way, so you never knew what you were going to get. Brown decided to start a whisky business with his half-brother, J.T.S. Brown, Jr., who was already in the whisky business, in 1870. Together they would purchase whisky from a distillery, batch it together, and bottle it. That would ensure anyone purchasing their product could expect safety and consistency. His signature was on the bottle as a guarantee to his customers. He decided "Old Brown" wasn't a good name for a bourbon brand, so he decided to name it after a prominent Louisville doctor, Dr. Forrester. Forrester had lost both his parents in a typhus epidemic and was raised at Farmington by the Speed family. He was well known for his role as a Union Cavalry surgeon who cared for both guards and prisoners at Andersonville after his capture. It's worth noting that George Garvin Brown had the idea for consumer protections long before the Bottled in Bond Act passed in 1897. This led the way into the modern era of whisky production, and once patents were granted for two piece machine blown glass bottles in 1887 and three piece machine blown glass bottles in 1893, whisky became closer to the modern product we now know. Brown-Forman was one of 6 Kentucky distilleries allowed to remain open during Prohibition. Today, Old Forester is the only bourbon distilled, aged, and bottled entirely in Louisville.