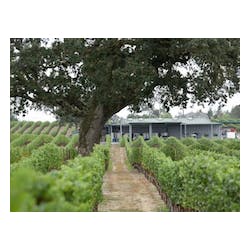 "Walter Hansel was a lifelong wine enthusiast who had the vision to plant his estate's original 250 vines in 1978. Today, Stephen, Walter's son, has taken up where his father left off, pursuing his vision of producing world-class Burgundian-styled Pinot Noir and Chardonnay, all from the Russian River Valley.

Steve Hansel's friend, famed winemaker Tom Rochioli, helped him in the early stages of his wine education by inviting him to work a couple of harvests at the Rochioli vineyards. Steve performed his first solo attempt in 1996 out of his garage.

At Walter Hansel Winery, the emphasis is on low yields (a miniscule range from 1.5 to 2.7 tons/acre) for greater complexity. Since all their grapes are grown on their own property, they can exercise strict control in the vineyards, which are planted with 5 Pinot and 5 Chardonnay clones. Each clone was chosen for its specific acid and flavor variations.

All of Steve's fruit is hand-harvested, and it is re-examined again at the winery. Hansel makes an average of 9 total passes through each vineyard. Each pass is time consuming and expensive but Stephen feels the vine rewards him with more concentrated flavors.

The winery uses only natural yeast during fermentation. Fining and filtration are minimal. The Pinots are held on the lees without racking for 12 months. The Chardonnays are whole cluster fermented and gently pressed to extract the juice. The cooperage varies from year-to-year, cuvée-to-cuvée, but none of the wine is aged on entirely new oak. One- and two-year-old barrels are always employed."

Vinous Media 93 "The 2017 Chardonnay The Estate Vineyard is fabulous, and also one of the very finest values in California wine. In 2017, I am

Vinous Media 92 "The 2014 Chardonnay The Meadows is all about richness, power and intensity, both in its sweetness through the middle and more tropically leaning

Robert Parker 92 "The least expensive Chardonnay (and it’s a heck of a value) is the 2012 Chardonnay The Meadows. Made entirely from the Hanzell clone

Vinous Media 94 "The 2013 Chardonnay Cuvée Alyce is a great example of the Hansel house style. Rich, textured and voluptuous to the core, the 2013

Vinous Media 93 "The 2013 Chardonnay The Meadows has a real sense of phenolic weight and density, yet the flavors remain bright, focused and beautifully nuanced

Vinous Media 91 "Hansel's 2014 Chardonnay The Estate Vineyard is arguably the single best value in California Chardonnay. Bright, focused and delineated, the 2014 shows all

Vinous Media 94 "The 2015 Pinot Noir The Estate Vineyard boasts off the charts intensity, richness and texture. Soaring aromatics and a core of dark red

Wine Advocate 94 "The 2015 season resulted in tiny clusters and small berries with production levels off by a minimum of 25%. The following 2015s will

Robert Parker 94 "The 2015 season resulted in tiny clusters and small berries with production levels off by a minimum of 25%. The following 2015s will

Vinous Media 93 "Lemon peel, white flowers, mint and tangerine give the 2016 Chardonnay The Meadows much of its aromatic breadth and overall presence. In 2016,